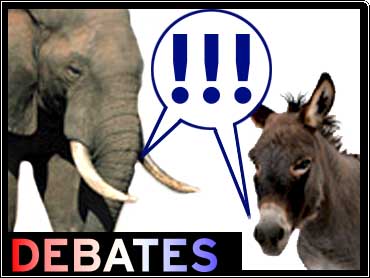 Just as Americans were finishing decorating their trees, lighting their menorahs and hauling in water to ward off Y2K disasters, Al Gore made that startling proposal to Bill Bradley that they can their paid ads and instead debate big issues twice a week.

Bradley essentially told Gore to take a hike, but this week Gore got half of his wish. The ads are still on, but over a six-day period there are two Democratic and three Republican debates. Only Sunday, January 9, is debate-free. After that, there are two more debates in Iowa before the Jan. 24 caucuses and back-to-back debates in New Hampshire on January 26.

These debates come at a crucial time. Both "front-runners," Gore and Bush, have seen their leads erode in New Hampshire and are struggling to keep their national momentum alive. Voters in the early caucus and primary states are starting to pay close attention and the national media have begun to cover Campaign 2000 in earnest now that there are only 17 shopping days left until the Iowa caucuses.

The tone of the campaigns has been surprisingly civil up until now. The televison ads have been filled with soft and fuzzy pictures of wives, kids, flags and home. The early debates saw a few flashes of wit and disagreement, but they were mostly about positioning and taking measure. This week, the top four candidates - Gore and Bradley, and Bush and McCain - have started to take each other on in speeches and we expect that these fights are a warm-up for the debates.

On the Democratic side, Al Gore has bee asking for a fight since he took off his tie last October. Bill Bradley said he was above all that, but this week he accused Gore of desperation tactics.

The major back-and-forth since the October debate has been the cost of Bradley's health-care plan. But Gore has also tried to get a rise out of Bradley on his ties to the pharmaceutical industry, his support (though quite limited) of school vouchers and his flip-flop on ethanol subsidies.

Bradley has responded mainly by accusing Gore of "old-style" attack politics. The debate on Saturday in Des Moines is especially critical for Bradley. Although he has been trailing Gore by a wide margin in most Iowa polls, he has made a decision to try to catch him.

He has hired a sociologist to find "casual Democrats" (read: first-time caucus goers). Bradley plans to sink almost $1 million into Iowa television in the next three weeks. His theory is that if he can come close to Gore in Iowa and win in New Hampshire, he can ride the crest of "free media" into the very expensive March primaries.

The Republican debates this week reflect a primary calendar that is somewhat different in the early stages from the Democrats. In addition to New Hampshire, the GOP candidates will be debating in South Carolina and Michigan. They don't get to Iowa until Jan. 15.

Actually, this schedule reflects the early success of John McCain as well as the GOP calendar. McCain decided to bypass Iowa, campaign like crazy in New Hampshire (49 days so far) and try to make his "breakthrough" in South Carolina, which holds its primary on Feb. 22.

South Carolina is the home of many military families - active and retired - and McCain's war record was thought to be particularly relevant here. McCain has been on the air in South Carolina since Nov. 13. A recent TV ad features an endorsement from South Carolina's up-country congressman, Lindsay Graham, which is filled with patriotic symbols.

Bush, however, has the support of most of the other Republicans in the state and his campaign is hoping that the firewall South Carolina native Lee Atwater created for George Sr. is holding firm for W.