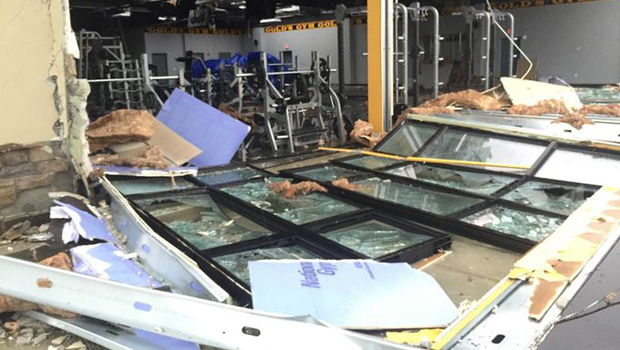 GULFPORT, Miss. -- A tough day is turning into a rough night in much of the Deep South. Multiple tornadoes were spotted Tuesday, including a waterspout near New Orleans.

At least two deaths were reported at an RV park in St. James Parish, Louisiana. About 100 RVs there were "tossed like toys," according to the manager. The St. James Parish sheriff said another 30 people were injured there, and seven of them are in critical condition.

Another person was killed in Lamar County, Mississippi, according to emergency officials.

As many as ten million people in five states will be under tornado watches in the next 24 hours.

It started during the lunch hour in Louisiana as a triple waterspout developed over Lake Pontchartrain in New Orleans.

An hour west in White Castle, a motorist captured what's believed to be a wall cloud with a tornado wrapped in it.

Another tornado was reported in Prairieville, 20 miles east of Baton Rouge. A Gold's Gym took a powerful punch, with a wall ripped off the building.

It was an eerie sight in Assumption Parish after a reported tornado created a path of destruction.

Within hours, there were reports of at least 11 tornadoes touching down across Louisiana, Mississippi and Alabama.

Dozens of schools closed early ahead of the severe weather, which knocked down power lines and damaged cars and homes. All across the Gulf Coast, more rain is expected to cause flash flooding.

Eric Fisher, chief meteorologist at CBS Boston, said a "particularly dangerous situation" tornado watch was in effect from New Orleans to the western parts of the Florida Panhandle overnight. He said the tornado risk will actually rise as the storm system moves from Louisiana west into Alabama and Georgia.

The severe weather threat moves up the East Coast on Wednesday, from the Carolinas up to Washington D.C.

Fisher said there was also a cold side to the storm, which could bring up to a foot of snow to parts of Illinois, Indiana and Michigan.