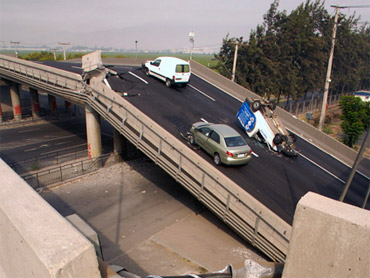 One of the largest earthquakes ever recorded tore apart houses, bridges and highways in central Chile on Saturday and sent a tsunami racing halfway around the world. Chileans near the epicenter were tossed about as if shaken by a giant, and the head of the emergency agency said authorities believed at least 300 people were dead.

The magnitude-8.8 quake was felt as far away as Sao Paulo in Brazil - 1,800 miles to the east. The full extent of damage remained unclear as scores of aftershocks - one nearly as powerful as Haiti's devastating Jan. 12 earthquake - shuddered across the disaster-prone Andean nation.

"If the epicenter was near a populated town, the town would be utterly destroyed,'' said Caruso. "Fortunately in this case, the epicenter was off the coast. And the people of Chile have experience with earthquakes and they were well prepared for this one."

President Michelle Bachelet declared a "state of catastrophe" in central Chile but said the government has not asked for assistance from other countries. If it does, President Obama said, the United States "will be there." Around the world, leaders echoed his sentiment.

Mr. Obama said the U.S. is ready to assist Chile in rescue and recovery efforts. He said the U.S. has resources that are in position to deploy should the Chilean government ask for U.S. assistance.

In Chile, newly built apartment buildings slumped and fell. Flames devoured a prison. Millions of people fled into streets darkened by the failure of power lines. The collapse of bridges tossed and crushed cars and trucks, and complicated efforts to reach quake-damaged areas by road.

"It was absolutely frightening. Absolutely terrifying. I really thought it was the end of the world,'' Cecilia Lagos told CBS News via Skype.

At least 214 people were killed and 15 were missing as of Saturday evening, Bachelet said in a national address on television. While that remained the official estimate, Carmen Fernandez, head of the National Emergency Agency, said later: "We think the real figure tops 300. And we believe this will continue to grow."

Bachelet also said 1.5 million people had been affected by the quake, and officials in her administration said 500,000 homes were severely damaged.

In Talca, just 65 miles from the epicenter, people sleeping in bed suddenly felt like they were flying through major airplane turbulence as their belongings cascaded around them from the shuddering walls at 3:34 a.m. (1:34 a.m. EST, 0634 GMT).

A deafening roar rose from the convulsing earth as buildings groaned and clattered. The sound of screams was confused with the crash of plates and windows.

Then the earth stilled, silence returned and a smell of moist dust rose in the streets, where stunned survivors took refuge.

A journalist emerging into the darkened street scattered with downed power lines saw a man, some of his own bones apparently broken, weeping and caressing the hand of a woman who had died in the collapse of a cafe. Two other victims lay dead a few feet (meters) away.

Also near the epicenter was Concepcion, one of the country's largest cities, where a 15-story building collapsed, leaving a few floors intact.

"I was on the 8th floor and all of a sudden I was down here," said Fernando Abarzua, marveling that he escaped with no major injuries. He said a relative was still trapped in the rubble six hours after the quake, "but he keeps shouting, saying he's OK."

Chilean state television reported that 209 inmates escaped from prison in the city of Chillan, near the epicenter, after a fire broke out.

In the capital of Santiago, 200 miles northeast of the epicenter, a car dangled from a collapsed overpass, the national Fine Arts Museum was badly damaged and an apartment building's two-story parking lot pancaked, smashing about 50 cars whose alarms rang incessantly.

While most modern buildings survived, a bell tower collapsed on the Nuestra Senora de la Providencia church and several hospitals were evacuated due to damage.

Santiago's airport was closed, with smashed windows, partially collapsed ceilings and destroyed pedestrian walkways in the passenger terminals. The capital's subway was shut as well, and transportation was further limited because hundreds of buses were stuck behind a damaged bridge.

Chile's main seaport, in Valparaiso about 75 miles from Santiago, was ordered closed while damage was assessed. The state-run Codelco, the world's largest copper producer, shut two of its mines, the newspaper La Tercera reported.

President-elect Sebastian Pinera angrily reported seeing some looting while flying over damaged areas. He vowed "to fight with maximum energy looting attempts that I saw with my own eyes."

(CBS/ AP)
Pedro Forteza, a pilot who frequently flies to the island, said, "The village was destroyed by the waves, including the historic cemetery. I would say that 20 or 30 percent has disappeared."

On the mainland, several huge waves inundated part of the major port city of Talcahuano, near the hard-hit city of Concepcion. A large boat was swept more than a block inland. Pinera flew over the area and said an unspecified number of people had died in Talacahuano.

Waves also flooded hundreds of houses in the town of Vichato, in the BioBio region.

The quake struck after concert-goers had left South America's leading music festival in the coastal city of Vina del Mar, but it caught partiers leaving a disco.

It then raced across the Pacific, setting off alarm sirens in Hawaii, Polynesia and Tonga and prompting warnings across all 53 nations ringing the vast ocean.

About 13 million people live in the area where shaking was strong to severe, according to the U.S. Geological Survey. USGS geophysicist Robert Williams said the Chilean quake was hundreds of times more powerful than Haiti's magnitude-7 quake, though it was deeper and cost far fewer lives.

More than 50 aftershocks topped magnitude 5, including one of magnitude 6.9.

The largest earthquake ever recorded struck the same area of Chile on May 22, 1960. The magnitude-9.5 quake killed 1,655 people and left 2 million homeless. It caused a tsunami that killed people in Hawaii, Japan and the Philippines and caused damage along the west coast of the United States.

Saturday's quake matched a 1906 temblor off the Ecuadorean coast as the seventh-strongest ever recorded in the world.