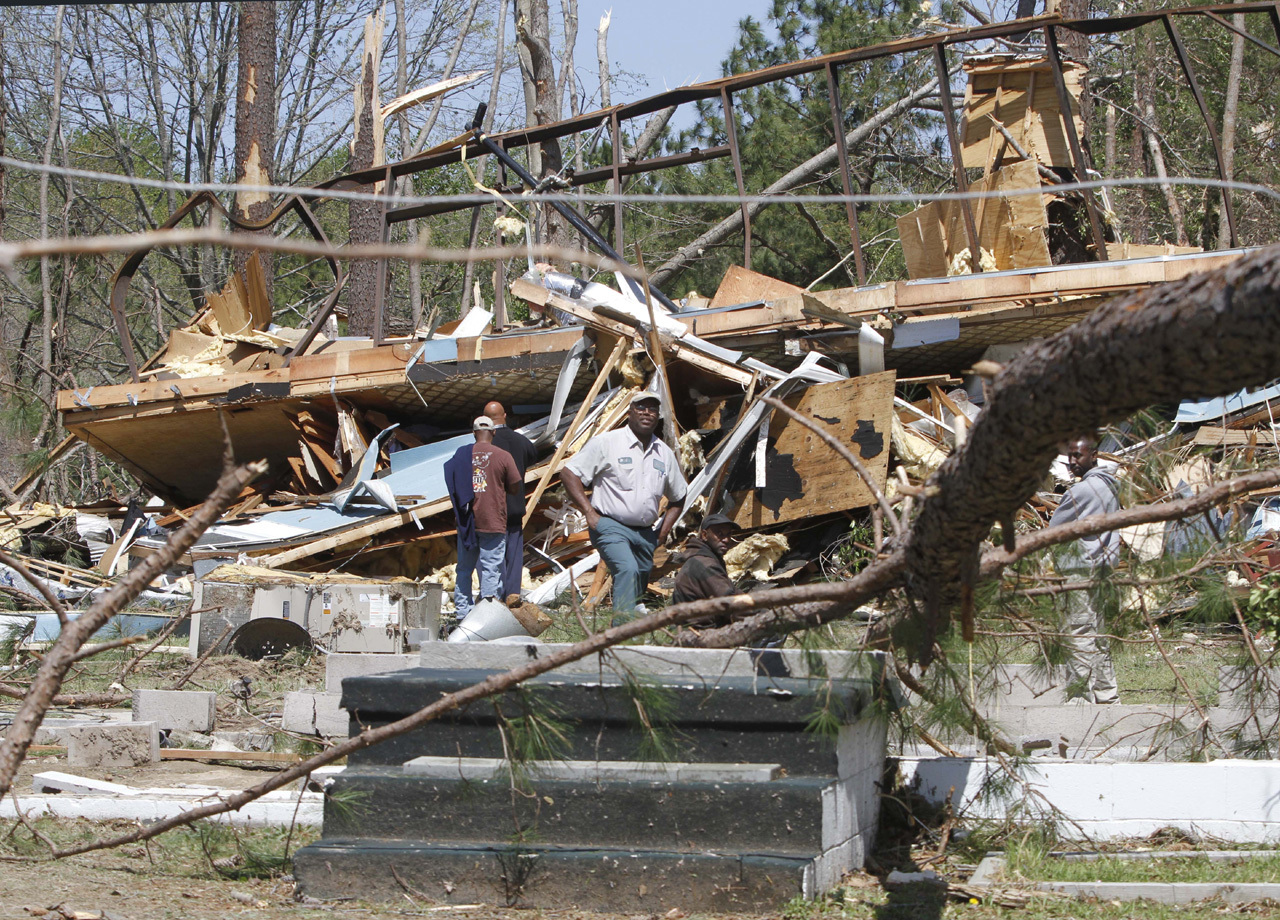 ASKEWVILLE, N.C. — A tornado-spewing storm system that killed at least 45 people across half the country unleashed its worst fury on North Carolina, where homes broke apart, trees snapped and livestock were swept into the air. Residents in the capital city and rural hamlets alike on Sunday mourned the dead, marveled at their own survival and began to clean up devastated neighborhoods.

Observers reported more than 60 tornadoes across North Carolina on Saturday, but most of the state's 21 confirmed deaths occurred in two rural counties. A thunderstorm spawned a tornado that killed four people in southeastern Bladen County, then kept dropping tornadoes as it hopscotched more than 150 miles, eventually moving into Bertie County and killing 11 more.

Heavy winds swept some homes from their foundations, demolished others and flipped cars on tiny rural roads between Askewville and Colerain, Bertie County Manager Zee Lamb said. At least three of those who died were from the same family, he said.

The winds ripped to shreds the doublewide mobile home in Askewville where Justin Dunlow had sought shelter for his 3-year-old daughter, 5-year-old son and himself. The 23-year-old roofer, whose own mobile home nearby also was destroyed, lay on both children as the storm did its worst.

"I just started praying, and the wall fell on top of us and that's what kept us there," he said. "I can replace the house, but I can't replace my babies. And that's what I thought about. I'm alive. My babies are alive."

In Bladen County, Milton McKoy had thought his mobile home in Ammon was out of the storm's path before he saw a tornado over the tops of pine trees, lifting pigs and other animals into the sky.

"It looked just like 'The Wizard of Oz,"' said his wife, Audrey.

The couple took shelter in the laundry room as the tornado snapped trees and carried off several homes in the neighborhood. When they stepped out, it took them a moment to figure out the twister had turned their own home around, leaving them in the backyard.

The violent weather began Thursday in Oklahoma, where two people died, before cutting across the Deep South on Friday and hitting North Carolina and Virginia on Saturday. Authorities said seven people died in Arkansas; seven in Alabama; seven in Virginia; and one in Mississippi.

Saturday was North Carolina's deadliest day for tornadoes since 1984, when 22 twisters killed 42 people and injured hundreds. The state emergency management agency said it had reports of 23 fatalities from Saturday's storms, but local officials confirmed only 21 deaths with The Associated Press.

The atmosphere was unstable, which allows air to rise and fall quickly, creating winds of hurricane strength or greater. There was also plenty of moisture, which acts as fuel for the violent storms. Shear winds at different heights, moving in different directions, created the spin needed to create tornadoes, Sharp said.

Spieldenner said the state medical examiner's office confirmed two people died in Gloucester County, where a tornado hit; two died in flash flooding in Waynesboro; and one person died in Wythe County when a tree fell on a mobile home. Officials were still investigating a death in Page County and one more reported in Gloucester County.

The winds in Gloucester tossed Christie Mathews' home at least 50 yards as she lay on top of her children in the bathtub, said her brother Randy Cook. The house was flung against several trees, prevent it from flying even farther.

"Everything in the house shattered and is flattened to the ground," Cook said as he walked through the debris.

He said Mathews broke two vertebrae and her boyfriend, who was also in the house, was flown to Newport News for surgery. But her son and daughter escaped with only scratches.

Gov. Beverly Perdue declared a state of emergency. After spending much of Sunday touring hard-hit areas, including downtown Raleigh, she said that despite her experience with natural disasters, the damage this time was so hard to bear it nearly brought her to tears.

Downed trees blocked major downtown thoroughfares in the bustling capital city of 400,000. Three members of a family were killed at a trailer park about five miles north of downtown.

Tania Valle, a 20-year-old freshman at Meredith College, came back to the trailer park to check on her mother, and said she had to wait hours before they were reunited. A tree split her mother's mobile home in half, leaving just one room intact.

"She's so nervous. She's sad," Valle said. "She said everything got destroyed."

Just east of downtown Raleigh at Shaw University, a tornado poked a hole in the roof of the student center and knocked out dormitory windows. The school canceled the last two weeks of school because of the damage.

In Dunn, about 40 miles south of Raleigh, the storm reduced more than half the 40 trailers in the Cedar Creek Mobile Home Park to unrecognizable piles of rubble. A bulldozer scooped up wooden beams Sunday and deposited them in a pile. In one home, all that remained was a bathtub and half of a recliner.

One woman died in the park, while a man was critically injured when a car blew on top of him outside his home.

"I think it will be a miracle if he survives," Dunn Police Chief B.P. Jones said.

Angela Wynn, 27, and her husband Reggie, 37, left the trailer park for her mother's home about a mile away as the sky darkened, just minutes ahead of the carnage that would shake their home off its foundation.

The dead included a 92-year-old father and his 50-year-old son, who lived next to each other in mobile homes in the town of Ammon. A 52-year-old woman also died in Ammon, and a 50-year-old man died in Bladenboro — both also thrown from their homes, County Medical Examiner Kenneth Clark said.

Many of the deaths occurred in mobile homes. Census data from 2007, the latest available, estimates 14.5 percent of homes in North Carolina are mobile homes, the seventh highest percentage in the nation and well over the U.S. average of 6.7 percent.