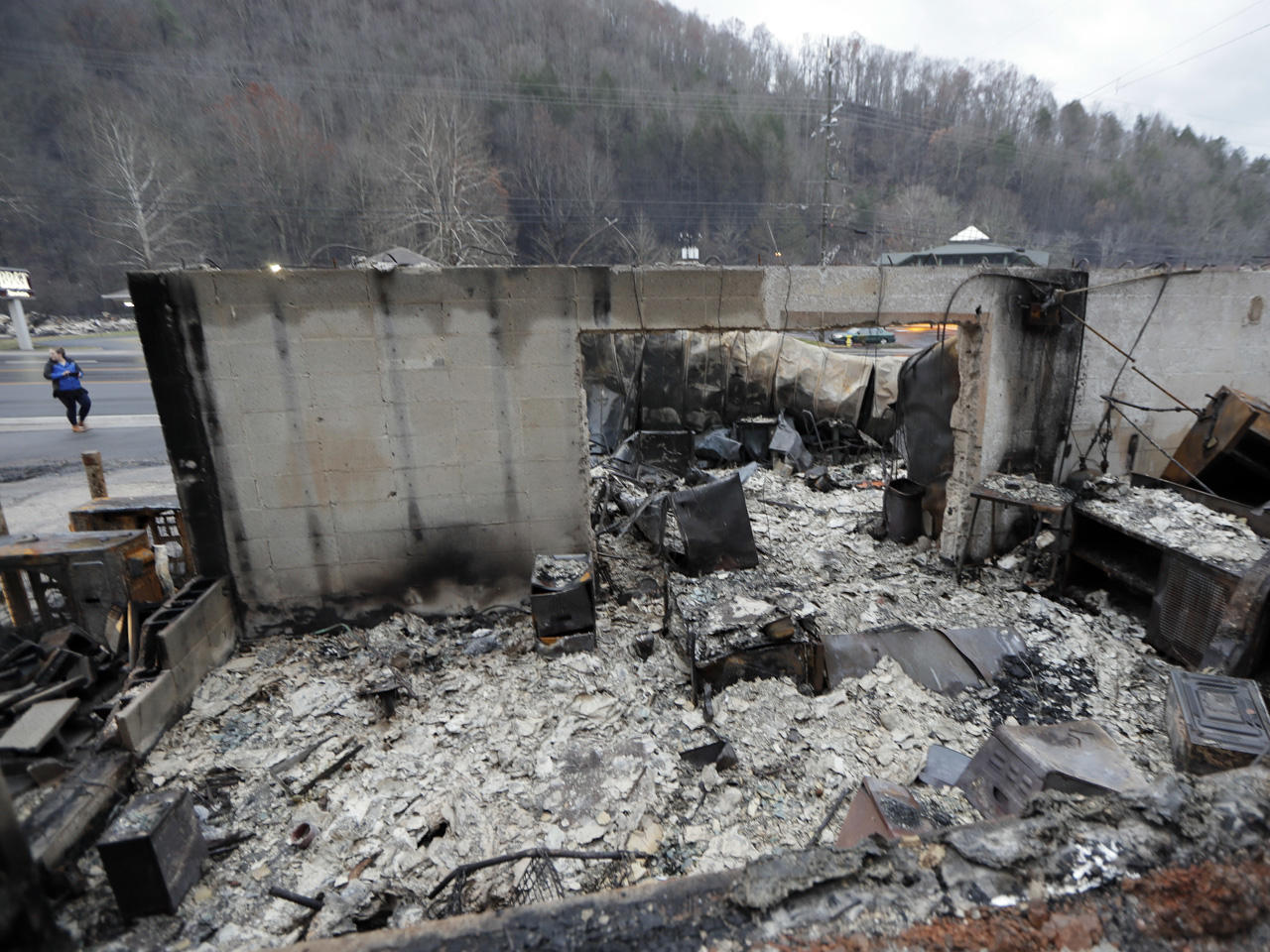 GATLINBURG, Tenn. -- The death toll from the Gatlinburg area fires has risen to 14.

On Sunday, the National Park Service and other authorities said 81-year-old Elaine Brown of Sevierville died fleeing the fire after she had a medical event driving that caused a multi-car crash.

Officials have increased the number of injures to 134. They say almost 1,700 structures have been damaged or destroyed by the fires.

Also this weekend, the Tennessee Emergency Management Agency said a mass text message telling people to evacuate was never sent. TEMA said the local command post requested the message at 8:30 p.m. Monday, but communication between agencies was lost because of disabled phone, internet and electrical services.

Previously, John Mathews of the Sevier County Emergency Management Agency said the text was sent, but everyone didn’t receive it due to power outages and loss of cellphone reception.

One couple who was on their honeymoon barely made it out in time, CBS News correspondent DeMarco Morgan reported.

“When we woke up Monday morning, we knew something was off because the view outside of the cabin was really smoky and foggy and it was an orange color,” Derek Wells said.

Asked about the overall response, Great Smoky Mountains National Park Superintendent Cassius Cash said the appropriate amount of resources was put in the area, including four helicopters dropping water Sunday. He said the wind came in earlier than forecast. His deputy said 1,000 firefighters and engines lined up end to end wouldn’t have prevented the flames.

Local officials, bowing to pressure from frustrated property owners, allowed people back into most parts of the city Friday morning. Residents passed through a checkpoint and showed proof of ownership or residency.

Among those anxiously waiting to return was Tracy Mayberry. He and his wife, 12-year-old son and five dogs have bounced between hotels since they were forced to evacuate their rental home Monday night. They were struggling to find a place to stay Thursday as many lodges began to discontinue the special rates for evacuees.

“It feels like Gatlinburg is more worried about how to rebuild than they are about their people,” he said.

The dead included a Memphis couple who was separated from their three sons during the wildfires. The three young men -- Jared, Wesley and Branson Summers -- learned that their parents had died as they were recovering in the hospital.

“The boys, swaddled in bandages with tubes hanging out and machines attached, were allowed to break quarantine, and were together in the same room, briefly, when I confirmed their parents’ death,” their uncle Jim Summers wrote on a Facebook page set up for the family. Their injuries “pale in comparison with their grief.”

At a news conference, Jim talked about the three young men’s harrowing escape and their parents’ death. He said the Summers family first received a call from their condo’s owner to evacuate. They jumped in Branson’s car and drove down the mountain until a tree blocked their path. They got out and ran and became separated from their parents.

They were found unconscious at the bottom of the mountain. Jim said the sheriff estimated they ran several miles.

“Quite frankly, the way the kids got down the mountain is a movie in and of itself,” Jim said. “I mean, It’s just beyond belief. They went through walls of fire.”

“I think probably that impacted me more than anything,” he added.

Other fatalities included a couple from Canada, 71-year-old Jon Tegler and 70-year-old Janet Tegler, and May Vance, who was vacationing in Gatlinburg and died of a heart attack after she was exposed to smoke. The names of the other victims have not been released.

In communities near Gatlinburg, there were signs of normalcy. In Pigeon Forge, the Comedy House rented an electronic billboard message that said it was open. A hotel flyer urged guests to check out the scenic Cades Cove loop: “Take a drive and remember what you love about the Smokies!”

The trouble began last Monday when a wildfire, likely caused by a person, spread from the national park into the Gatlinburg area as hurricane-force winds toppled trees and power lines, blowing embers in all directions.

More than 14,000 residents and visitors in Gatlinburg were forced to evacuate, and the typically bustling tourist city was shuttered.

Deputy Park Superintendent Jordan Clayton said the initial fire on an area called Chimney Tops, a double peaked ridge line about 4 miles away from Gatlinburg, was caused by a person or people. It started near the end of a popular hiking trail on Nov. 23.

“Whether it was purposefully set or whether it was a careless act that was not intended to cause a fire, that we don’t know,” Clayton said. “The origin of the fire is under investigation.”

Agents from the Bureau of Alcohol, Tobacco, Firearms and Explosives are helping investigate the cause.