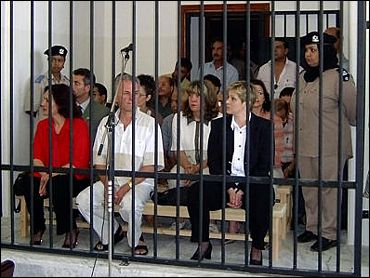 A Libyan court has condemned six Bulgarian medics to death by firing squad for infecting patients with the HIV virus.

The head of the five-judge panel that heard the case, Fadallah el-Sherif, said Thursday: "The court is sentencing the defendants No. 1-6 to death by firing squad."

Under Libyan law, people to condemned to death automatically have the right to appeal.

Prosecutors had demanded death sentences, accusing the Bulgarians of intentionally infecting more than 400 children with HIV-contaminated blood as part of an experiment to find a cure for AIDS. Twenty-three of the children reportedly have since died of AIDS.

Initially Libya claimed the infections were part of a conspiracy by the CIA and Israeli intelligence; it has backed away from those allegations.

All six had pleaded not guilty.

Libyan police arrested the six in February 1999. They were in prison until September 2002, when a high tribunal in the Libyan capital, Tripoli, acquitted them of conspiracy charges and handed the case over to an ordinary criminal court. They were then placed under house arrest in Tripoli until being detained again when their trial recommenced in Benghazi in September, according to Bulgarian media reports.

Dr. Luc Montagnier, the French co-discoverer of the AIDS virus, said poor hygiene at the Benghazi hospital likely led to the contamination, and estimated it happened in 1997 - more than a year before the Bulgarians were hired to work there.

But a commission of court-appointed Libyan doctors rejected the Western expert's testimony and said the Bulgarians willfully infected the children with the virus through blood transfusions.

The speaker of Bulgaria's parliament Ognyan Gerdzhikov, said that the verdicts will be appealed.

The European Union, Amnesty International and other organizations have criticized the proceedings, and Bulgarian Foreign Minister Solomon Pasi claims the medics were severely tortured.

The suspects have said they were jolted with electricity, beaten with sticks and repeatedly jumped on while strapped to their beds. Two of the women said they were raped.

The trial before the criminal court in Benghazi was nearing its end when Libyan leader Moammar Gadhafi sought to end decades as an international pariah. He has recently renounced weapons of mass destruction and opened his programs to international inspection.

Libya has also agreed to pay damages to relatives of passengers killed in the 1988 bombing of Pan Am Flight 103 over Lockerbie, Scotland, and the 1989 bombing of a French jetliner.