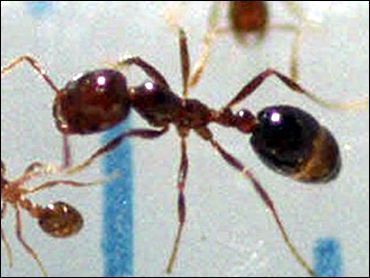 A Chinese business executive was sentenced to death for swindling $385 million from investors in a bogus ant-breeding scheme, a court official said Thursday.

Wang Zhendong, chairman of Yingkou Donghua Trading Group Co., had promised returns of up to 60 percent for buying kits of ants and breeding equipment from two companies he set up, the reports said.

Ants are used in some traditional Chinese medicinal remedies, which can fetch a high price. Wang sold the kits, which cost $25, for $1,300, the Xinmin Evening News and other newspapers reported.

Wang promoted his products through advertising and drew in more than 10,000 investors between 2002 and June 2005, when investigators shut down his companies, the Web site of People's Daily reported.

Prosecutors told the court in northeast China that one investor committed suicide after realizing he had been duped, and only $1.28 million of the swindled money had been recovered by the time the case was filed with the court last June, Xinhua News Agency said.

The Intermediate People's Court in Yingkou on Tuesday sentenced Wang to death, said an official in the court's case office who gave only his surname, Yin.

Fake investments and pyramid investment schemes have become common during China's transition from a planned economy to a free market. Chinese leaders have tried to eradicate the scams, fearing widespread losses could add to already percolating social unrest.

The death penalty is used broadly in China. Though usually reserved for violent crimes, it is also applied for nonviolent offenses that involve large sums of money or are deemed to have a pernicious social impact.