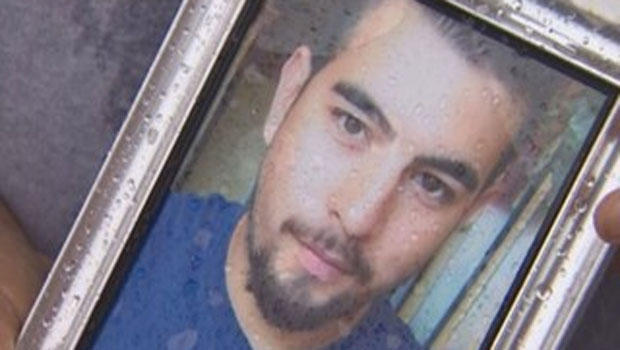 HOUSTON -- The death of a man who was restrained by an off-duty Texas sheriff's deputy and her husband during a late-night confrontation outside of a Denny's was ruled a homicide on Tuesday, and the case is set to go before a grand jury.

John Hernandez, 24, died of lack of oxygen to the brain caused by strangulation and chest compression, according to the Harris County medical examiner. Witnesses told CBS affiliate KHOU Hernandez was quickly overpowered by the man, who continued to beat him then put him in a chokehold for 10 to 15 minutes. They said Hernandez was too drunk to defend himself.

Investigators said the May 28 altercation started after the husband of a Harris County deputy became offended when he allegedly saw an intoxicated Hernandez urinate outside the Houston-area restaurant. They said the deputy helped her husband restrain Hernandez and that the incident ended with a motionless Hernandez being rushed to a hospital.

Cellphone video that a bystander recorded of the incident has been released by the unidentified person's lawyer and posted on local media websites. The footage shows a man lying on top of Hernandez. Jack Carroll, the attorney for the person who recorded the video, said the man restraining Hernandez used an illegal chokehold.

Community leaders and family members gathered Wednesday and marched through downtown Houston, according to KHOU, demanding an immediate arrest of the off-duty deputy and her husband, an independent investigation, and no bail. Many carried signs with the hashtag, #JusticeForJohnny.

Randall Kallinen, an attorney for Hernandez's family, said authorities should make arrests based on the medical examiner ruling and the bystander-recorded video of the confrontation. Scot Courtney, an attorney for the deputy and her husband, said Hernandez was the aggressor.

The lawyer claims his client did not intend to kill anyone. He said the couple has received threats and cautioned against "the call for justice so quickly before we even have all the facts."

"I think it's irresponsible," Courtney said. "It leads to a mob mentality."

Berg said homicide detectives didn't immediately investigate the case because Hernandez didn't die until several days later. Berg said both the deputy and her husband were interviewed by patrol officers at the scene but have since "declined" requests to speak with the district attorney's office.

Hernandez was initially reported to be the aggressor, but Berg said there was no immediate report to the district attorney's office he been transported unconscious to the hospital with very little vital signs.

"Obviously, everybody's looking at that," he said.

Berg said the behavior of the deputy would also be considered by the grand jury.

Sheriff Ed Gonzalez said he has asked the Texas Rangers and the U.S. Department of Justice to assist in the investigation.