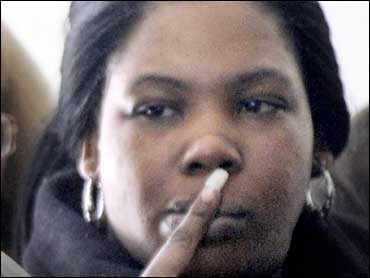 A 10-year-old boy reportedly found hanging from a coat hook at his suburban Chicago school took his own life, according to a preliminary coroner's office ruling on Wednesday.

A daily ledger released by the Cook County medical examiner noted "hanging" and "suicide" as the cause of death for fifth-grader Aquan Lewis, who was found unresponsive in a bathroom at the Evanston school Tuesday afternoon and was pronounced dead at a hospital Wednesday morning.

Neither the medical examiner's office nor Evanston police returned messages Wednesday from The Associated Press.

"I want my son back," Lewis told CBS affiliate WBBM-TV.

A janitor at Oakton Elementary School, Elliott Lieteau, said he found Aquan on the floor of the restroom and that others told him the boy had been pulled off a hook. Lieteau said he performed CPR.

Speaking before the coroner's finding, a community activist who accompanied Lewis and acted as her spokeswoman said Lewis did not believe her boy would have committed suicide.

"She sent her son to school yesterday morning in good spirits," Dawn Valenti said. "The next thing she knows she's getting a call that her son died. ... He did not commit suicide. There was nothing wrong with her son."

Before leaving the building, Lewis stood at the back of the room during a news conference with police and school officials, crying and sometimes shaking her head as officials fielded questions.

At the news conference, Evanston police Cmdr. Tom Guenther repeatedly declined to provide any details on the investigation and would only call Aquan's death "an isolated incident."

"It's devastating," said school board member Jerome Summers. "Nobody anticipates the death of their child when they send their kid to school."

School officials still are trying to determine when the boy left his class to go to the bathroom, said Superintendent Hardy Murphy. There are no security cameras inside the school.

Two police cars were parked outside the sprawling, three-story red brick school, which has about 420 students in kindergarten through 5th grade.

Maria Patino of Evanston said her fourth-grade daughter, a student at the school, was frightened and confused about what had happened.

Her daughter asked, "Mommy, is the person going to come for me, too?" because she thought somebody had intentionally hurt the boy.

"I didn't know what to say," Patino said in Spanish. "It's too hard for a child to understand."

Third-grader Michael Barrera, 9, talked to reporters as he left the school with his mother. He said he was uncomfortable at school Wednesday, so he was leaving early.

"My mom doesn't think I should stay at school and should come home and rest at the house so that I'm not so sad about what happened," the boy said, a backpack over his shoulder.

Many students were frightened Tuesday as news spread that a classmate was seriously hurt and rumors spread that he might have been killed, Barrera said.

"I was scared that nothing would happen to me or my friends," he said.

There have been other cases of students hanged at school.

Last February, a 7-year-old boy in Austin, Texas died after being hanged by his shirt from a coat hook in a school dressing room; authorities said he might have been playing a game in which students jumped from bench to bench while trying to touch the room's ceiling.

And in 2005, a Philadelphia third-grader was found unconscious and hanging by his shirt collar on a hook in a school coatroom, but lived. Both cases were ruled accidents.