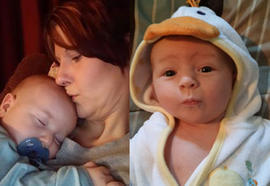 PLATTE CITY, Mo. -- Court records say prosecutors will seek the death penalty if a northwest Missouri man is convicted of killing four members of his family.

The Kansas City Star reports a June 1 hearing is scheduled in Platte County Circuit Court in the case against 25-year-old Grayden Lane Denham.

Denham is accused of fatally shooting his grandparents, his sister and her 3-month-old son in February 2016. Their bodies were found outside a burning home near Edgerton.

He has pleaded not guilty and is being held in Platte County Detention Center. Bond is set at $4 million.

Denham was arrested in Seligman, Arizona, where police said he was walking around naked two days after the bodies were found. He is also charged with arson and animal abuse for shooting a dog.

Details of events preceding the shooting and fire haven't been released.