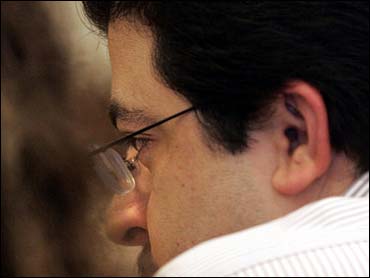 A jury decided a factory worker should get the death penalty for killing Samantha Runnion, the 5-year-old girl whose abduction in 2002 came amid a series of attacks on children that prompted national outrage.

The jury reached its verdict Monday after deliberating about seven hours over two days in the penalty phase of the Alejandro Avila trial.

Samantha was abducted from her yard kicking and screaming, reports CBS News Correspondent Sandra Hughes. Avila, a 30-year-old factory worker, sexually assaulted her and then killed her, leaving her naked body by a mountain road. He was convicted last month.

"Alejandro Avila ... decided his self-satisfaction was more important than the life of this beautiful young girl," Orange County District Attorney Tony Rackauckas said outside court. "He will never, ever again hurt another child."

The prosecutor called this the most horrific crime he's seen in his 30 year career, and credited Samantha's strength in making this case.

"She resisted, she fought, she did all that she could to resist this terrible crime that was happening to her, and in doing so she left evidence, DNA evidence, that identified Alejandro Avila as the culprit," Rackauckas said.

Sentencing was set for July 22. A judge can set aside a jury's death penalty recommendation, but that is extremely rare.

"It's hard to believe it's over. I've been coming to court since late January," she said. "And the fact of the matter is one's down but my baby's still gone."

Erin Runnion has started a foundation, the Joyful Child, to help parents protect children from predators, which she told CBS News Early Show co-anchor Harry Smith is now what matters.

"You know, I really didn't care what happened to him. The guilt was my primary concern," Runnion said. "As far as I'm concerned, the main issue is to make sure he can never hurt another child."

Defense attorneys had urged jurors to spare Avila's life, arguing that the abduction was an impulsive act prompted by a brutal childhood in which he was beaten by his father, raped by an uncle and neglected by his mother.

After Samantha's death, then-Gov. Gray Davis ordered a statewide expansion of child abduction alerts posted on electronic billboards along freeways. So many were moved by the little girl's murder that more than 4,000 people attended her funeral.

During the trial, prosecutors used cell phone and bank records to show that Avila had been in the area where Samantha was abducted. Also, prosecutors said his DNA was under her fingernails, and sneaker prints and tire tracks found near the girl's body were connected to the defendant. And Samantha's DNA was found on the inside of the door of Avila's car, probably from tears or mucus, prosecutors said.

The defense challenged the reliability of the DNA analysis and suggested that the material found inside Avila's car had been planted.

Samantha's killing occurred amid a series of incidents involving children, including the murder of 7-year-old Danielle van Dam of San Diego and the abduction of 15-year-old Elizabeth Smart in Utah.

There's too much of an emphasis on finding such victims, said Erin Runnion Tuesday, and not enough to preventing such crimes.

"The only known deterrent to stop child predators is the risk of getting caught," she said on The Early Show. "Pedophilia is controllable. These people can find a way to control it. We have to make the risk too great."