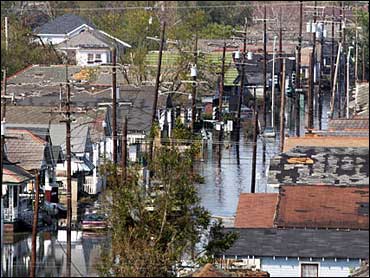 Authorities said the first street-by-street sweep of this swamped city revealed far fewer corpses than originally feared, a glimmer of encouraging news amid the toxic floodwaters.

The mayor and others had predicted up to 10,000 deaths, but that number appeared less likely after Friday's count, said retired Marine Col. Terry Ebbert, the city's homeland security chief.

"Some of the catastrophic deaths that some people predicted may not have occurred," Ebbert said.

He declined to give a revised estimate, but said: "Numbers so far are relatively minor as compared to the dire projections of 10,000."

But while the news was encouraging, death lingers in the air. CBS News Correspondent Byron Pitts reports that Londi Moore's lakefront home looks more like a junk yard – her house sits on stilts and the neighbor's house now sits in her back yard.

"There's something dead back here. We don't know if it's a body," Moore said.

Meanwhile, the U.S. Army Corps of Engineers projected it will take a month to dry out New Orleans, which had been 80 percent covered following the storm and levee breaches. The Corps previously said it could take 80 days.

The news came as authorities shifted most of their attention to counting and removing the dead, after days spent cajoling the living to get out of a city beset by fetid floodwaters and scattered fires.

Since the hurricane struck Aug. 29, residents, rescuers and cadaver-sniffing dogs have found bodies floating in the water, trapped in attics or left on broken highways. Some were dropped off at hospital doorsteps or left slumped in wheelchairs out in the open.

Police and soldiers had been marking houses where corpses were found, or noting their location with global positioning devices, so that the bodies could be collected later.

Mayor Ray Nagin had suggested last weekend that "it wouldn't be unreasonable to have 10,000" dead, and authorities ordered 25,000 body bags. But soldiers brought in over the past few days to help in the search were not seeing that kind of toll.

"There's nothing at all in the magnitude we anticipated," said Maj. Gen. Bill Caldwell, commander of the Army's 82nd Airborne Division.

Ebbert said the search for the dead will be done block-by-block, with no news media allowed to follow along.

"You can imagine sitting in Houston and watching somebody removed from your parents' property," he said. "We don't think that's proper."

State officials could not provide an exact count of the dead recovered so far. Corpses from New Orleans were taken to a morgue in nearby St. Gabriel, where medical examiners worked to identify the remains.

Still, thousands of stubborn holdouts were believed to be staying put in the city.

"There are still quite a few still holed up in their homes," said Oklahoma Army National Guard Brig. Gen. Myles L. Deering. "We'll continue to check on them to make sure they're OK and try to encourage them to leave."

"I'm not budgin'. The only way they gonna make me move, they gonna have to hog tie me," a defiant Freddie Johnson told Pitts.

There were no widespread reports of anyone being taken out by force under a three-day-old order from the mayor, and there were growing indications that that was little more than an empty threat.

"We're trying our best to persuasively negotiate and we are not using force at this time. I cannot speak to the future," said city attorney Sherry Landry.

Police fearing deadly confrontations with jittery residents enforced a new order that bars homeowners from owning guns. That order apparently does not apply to the hundreds of M-16-toting private security guards hired to protect businesses and wealthy property owners.

In a shift, the military began providing cages to homeowners to allow them to evacuate with their pets. "We got the capacity, and it seemed like the right thing to do," said Army Lt. Gen. Russel Honore.

Meanwhile, the floodwaters continued to recede, with about three dozen of the 174 pumps in the area working and an additional 17 portable pumps in place. About 350,000 people in the New Orleans area were still without electricity, but utilities said some power has been restored to the central business district.

Authorities said the airport will reopen to commercial flights Sept. 19. And a $30.9 million contract was signed Friday to rebuild the Interstate 10 bridge over Lake Pontchartrain that sustained major hurricane damage.

The developments in New Orleans came against an increasingly stormy backdrop in Washington, where Federal Emergency Management Agency Director Michael Brown was relieved of his command of the onsite relief efforts amid increasing criticism over the sluggishness of the agency's response and questions over his background.