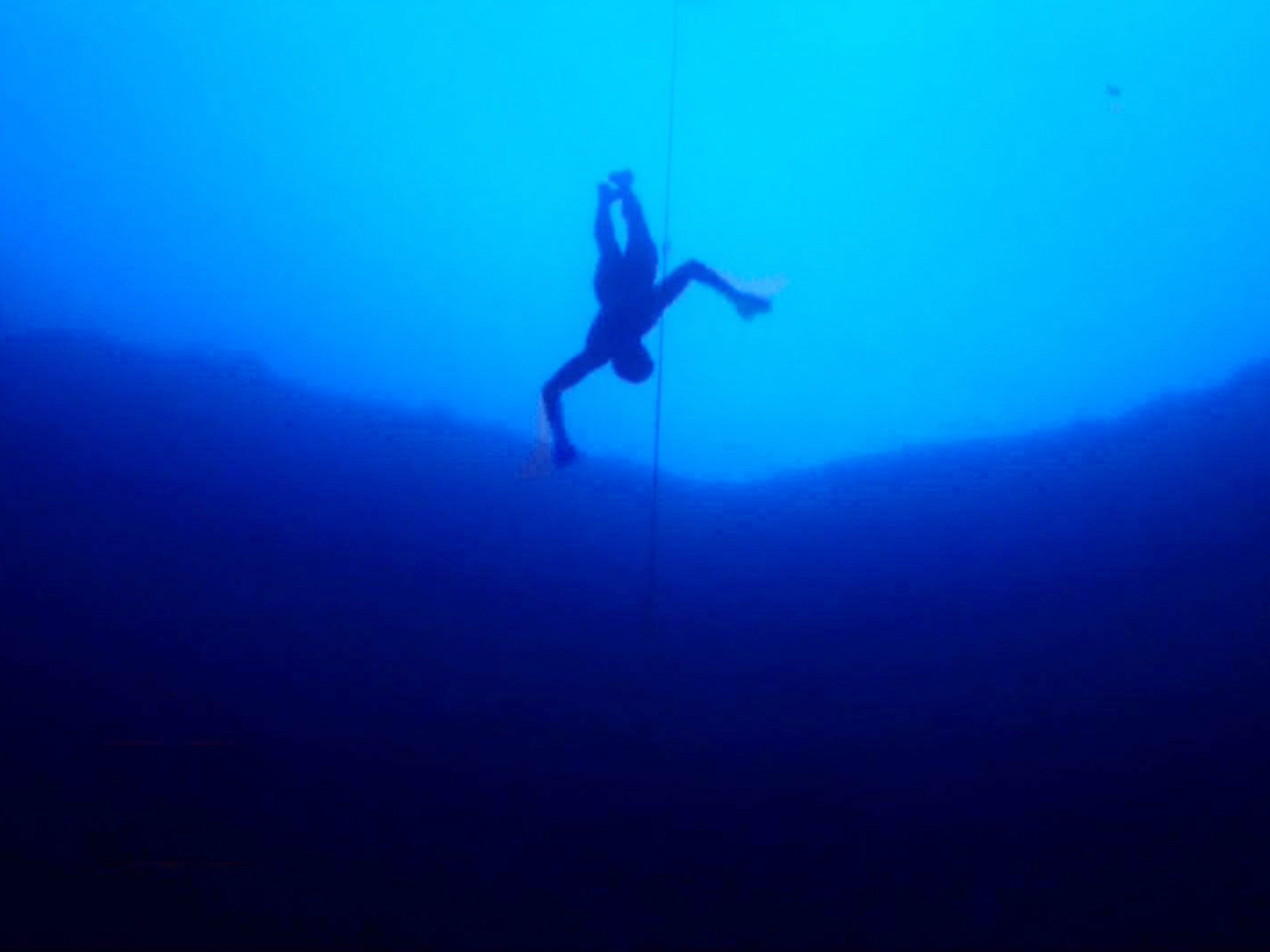 The following script is from "Free Diving" which aired on Jan. 13, 2013. Bob Simon is the correspondent. Michael Gavshon, producer.

Ever tried to hold your breath for as long as you can? Most of us have. Well this is a story about people who hold their breath for a really long time and dive down to depths never even approached before.

The sport is called free diving and it involves going down hundreds of feet into cold and dark waters on one single breath. It's considered an extreme sport because it is very dangerous. It's an experimental sport because it is revealing human capabilities which had never even been imagined, forcing medical scholars to rewrite their textbooks on human physiology. It's becoming more popular every year and our story might encourage more people to try it. Or not.

Free diving has been around a very long time. Homer and Plato wrote about it. It was how the ancient Greeks went down for sponges. Without so much as a snorkel, they'd dive to around 100 feet. Today's free divers go down a lot further for fun and sport. They want to join the sea world without disturbing it. No tanks, no bubbles, no noise. Yes, that is a shark but it seems friendly enough. The diver, New Zealander William Trubridge has become just another guy in the neighborhood.

Trubridge is also a world champion in the competitive sport of free diving. Here, he is getting ready to dive 331 feet, twice the height of the Statue of Liberty on a single breath. He'll be doing this just with his arms and legs no fins to help him.

This film -- with the music -- was produced by his team. Going down is the easy part. After 70 feet, he's loses buoyancy and gets pulled down by gravity alone.

He reaches his target, collects a tag to prove that he got there and goes into reverse for the hard part: getting back up.

His body is craving oxygen but he goes up slowly and gracefully as if he were doing a water ballet.

He was underwater four minutes and 10 seconds.

Bob Simon: Five years ago, did anyone think it was possible to go down 100 meters?

William Trubridge: When the record was 80? I don't think so. I don't think anyone realistically thought it was going to happen or at least not soon.

Bob Simon: Isn't there a certain limit of underwater that's just-- you can't go beyond it without dying?

William Trubridge: Definitely. It's out there but there's no way of kind of knowing exactly where it is. It's just deeper than we are now, we know that much.

And because of free diving, scientists now know that humans are closer to dolphins than had been thought. Just like dolphins, when we go into cold water a reflex kicks in which slows down our pulse; shifts blood from our extremities to our heart and to our brain. Our spleen contracts releasing oxygen rich blood into our arteries.

Is under the water a place humans belong? Free divers think so. They point out that the amniotic fluid in the womb where a fetus lives for nine months is very similar to seawater. That if a newborn is immediately submerged in a pool it will swim the breaststroke and be able to hold its breath for 40 seconds. It will retain this ability until it learns how to walk. Then it's all over.

During her career as a free diver Tanya Streeter held 10 world records. She had gone down deeper than any man. The key to her success, she says, is her ability to equalize the pressure underwater so her eardrums don't burst.

Tanya Streeter: As you dive, the pressure of the weight of water around you increases. And it pushes your eardrums in and in and in. And you have to push air into the Eustachian tubes to be able to pop the eardrums out to equalize that pressure. I mean it hurts. I've described it as an elephant sitting on my chest, stabbing hot pokers in my eardrums.

Bob Simon: Nobody would choose to do that.

Tanya Streeter: No. But, you know, you sort of find yourself there at that point on your journey, and realize that that's what you signed up for. So it's all par for the course.

Tanya and other free top divers go to the remotest part of the Bahamas called Long Island which is the Mecca of free diving. Christopher Columbus put Long Island on the map in 1492 but you'll have trouble finding it on any tourist map today. The jet set doesn't come here because jet planes don't fly here from America or Europe. There are hardly any hotels, no golf courses, no frozen margaritas.

Right off the beach there is a massive limestone cavern called Dean's Blue Hole. It is 663 feet deep, and it is dangerous. A few days after we left, a teenager dove into the Blue Hole and didn't come up. His body was never found.

This is where William Trubridge lives and trains. For the last six months, he's led a monastic existence, getting ready to try for another world record. He wants to make it down to 410 feet on one breath. This time using a single fin. To get ready he goes through a unique a set of exercises that he designed himself to make his body more flexible and supple, more like a dolphin. His waist here is 27 inches.

Then the countdown. His wife Brittany is on the platform. His parents are on the shore. The judges and safety divers are in the water. Their job: to save him if he loses consciousness.

In any other sport, a spurt of adrenalin would be a good thing. Not here -- tension, anxiety consume oxygen -- what you need is serenity.

He begins to swallow air. He is literally swallowing air, packing his lungs with more air than they could receive from breathing alone. Free divers discovered this technique themselves to expand their lungs. And in his head?

William Trubridge: Sometimes if I'm taking my last breath, a voice will pop into my mind saying, "This-- this is-- could be your last breath of your life." Or, "You're gonna die." It's kind of like the devil's advocate sitting on your shoulder whose going to think of the worst possible thing and voice that in your mind.

Bob Simon: The devil is still talking to you?

His lungs are now the size of watermelons. As he descends, they will be squeezed until they're no larger than oranges. His heartbeat slows down to 27 beats a minute. His mother is counting seconds. Down deep, the Blue Hole becomes the Black Hole.

William Trubridge: You're alone with yourself down there at depth. And the-- even your body slips away so that it feels like you're just a kind of a speck of consciousness that's floating into the abyss. You're weightless. There's no light, no sound and so it's almost as if you're floating in a completely empty tank.

The pressure is causing his brain to absorb more nitrogen. He is feeling light-headed, kind of drunk. It happens to all divers deep down. It's called narcosis. Suddenly, a bright light on the base plate 410 feet down. He takes his tag and begins his ascent.

At 100 feet he is joined by his safety divers like a pod of dolphins, they guide him through the most hazardous part of the dive, running out of oxygen can cause a blackout.

The sound you are hearing is William expelling air from his sinuses.

He's made it, but for his record of 410 feet to be ratified by the judges he needs to perform three simple tasks when he gets to the surface, take his goggles off, give the OK sign with his fingers and say, "l'm OK" in that precise order. Sounds simple but William's brain isn't working. He does these things in the wrong order. The judges disqualify him.

Linden Wolbert: He took off the nose clip, made the sign and said "I'm OK" without removing his goggles.

Bob Simon: Boy o' boy. He had just been down a quarter of a kilometer.

Bob Simon: He did goggles in the wrong order and it cost him his record.

Linden Wolbert: It did.

It sounds like a technicality, but he has to prove that his mind is as tough as his body.

Bob Simon: You got there. You got deeper than anyone has ever gotten before.

Bob Simon: And then you took your mask off and said "OK" in the wrong order and it was all for nothing.

Bob Simon: And you're smiling.

William Trubridge: I feel good because I know I can do it again-- maybe it might not be for a while, but I can definitely do that depth.

Bob Simon: But you did feel narcosis?

Tanya Streeter had a close call with severe narcosis 10 years ago. She was doing what's called No Limits diving -- going down in a weighted device which moves fast and goes down deeper than most WWII era submarines. This is Tanya at 525 feet, deeper than anyone had ever gone. She blew a kiss to the ocean. But then she became disoriented. It took her 17 agonizing seconds to remember she had to pull a pin -- any longer and she might have stayed down there forever. But with experiences like this, why go down at all?

Tanya Streeter: It's just a little bit difficult for people to fathom, if you excuse the pun, but it's what I love to do. You know, it's a common phrase in free diving, we don't dive to look around us, we dive to look within ourselves. It's a journey of self-exploration.

Bob Simon: What can you possibly be exploring in your own mind when your ears hurt and you're out of breath and it's dark and, you know, it's dangerous?

When we watched this, we thought about other sports: running, climbing, boxing, swimming. They've all been essential for the survival of the human race. But descending into blackness where there's no air...Yet, free diving is becoming more popular every year.