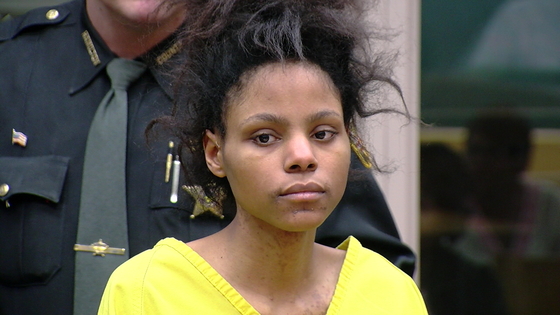 CINCINNATI -- An Ohio woman charged with stabbing and decapitating her 3-month-old daughter pleaded guilty to murder and was sentenced Thursday to 15 years to life in prison.

Deasia Watkins, 22, pleaded guilty in the March 2015 death of Jayniah Watkins. She told a Hamilton County judge that she loved her daughter very much.

Watkins previously had pleaded not guilty by reason of insanity to aggravated murder. She was ordered to have psychiatric treatment and later found competent to stand trial.

Court records say she had been diagnosed with postpartum psychosis, and her attorneys said in court that she’s taking medication for the condition. Messages seeking comment from Watkins’ attorneys were left at their offices Thursday.

Police responding to a 911 call on March 16, 2015, found the decapitated infant on the kitchen counter in the home of an aunt who was temporarily caring for the child. The baby had been stabbed several times with a large chef’s knife, authorities said. She also had a fractured arm. Watkins had placed the knife in the infant’s hand, police said.

“She later told police she did that so people would think the child did it - not her,” Hamilton County Assistant Prosecutor David Prem said in court, according to The Cincinnati Enquirer.

County prosecutor Joe Deters has said Watkins appeared to be suffering from “serious mental issues” when police found her at the aunt’s home in a bed covered with blood.

Watkins was considered a threat to her child and had been “acting crazy” and talking about demons when a juvenile court judge placed the baby in the custody of Hamilton County Job and Family Services, according to court documents. Social workers later placed the baby in the temporary care of an aunt, who authorities say was warned to keep the mother away from the child unless social workers were present.

Court documents say doctors declared her unsafe around the child unless she took prescribed medication.

The prosecutor’s office has said Job and Family Services followed court orders, finding a relative to care for the child and checking on her numerous times. But Deters said social workers didn’t know the mother apparently moved into the aunt’s home about a week before the slaying.