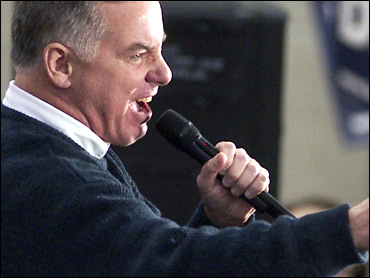 The media is having a great time with Howard Dean's "concession" speech in Iowa last Monday. Like a horrific car accident on the side of the road, the clip of Dean listing the states with early primaries, and ending with a gleeful "yalp," is hard not to watch, even if there is nothing to gain from seeing it.

On Thursday, while campaigning in New Hampshire, Dean tried to do damage control, looking for some understanding from the public and press.

"There are a zillion mistakes I've made," he said, trying to explain away some of his recent heavily criticized behavior. "I've got plenty of warts."

Dean was not apologizing for his Iowa speech, but he was clearly asking for a pass. The question is, does he really need one?

As is so often the case in politics, there is more to the Iowa speech than meets the eye. On Monday night, as early caucus returns began to be reported, the unthinkable started to sink in on the wide-eyed and true-believing Dean supporters.

The 3,500 staff and supporters who had gathered for what they thought would be a raucous victory party had to face the reality that their candidate had lost – and lost badly. Most held back their tears, but the tone in the room soon turned somber, defiant and bitter.

And then eyes went toward the stage, as Howard Dean's most dedicated supporters looked for direction from their leader.

Reporters were looking, too. Dean had won the race for governor in Vermont five times in a row. He had skyrocketed to the head of the polls in race for the Democratic nomination, looking for months like the presumptive winner. How would he handle a loss?

By now, everyone with cable TV knows: he'd be fiery.

Before Dean came out onstage, communications director Tricia Enright worked the press in the back of the hall. "He's going to be fiery," she told reporters. She said Dean would walk out on stage, take off his jacket, hand it to Sen. Tom Harkin and roll up his sleeves. Dean, she said, was fired up.

The rest, by now, you know.

What you might not know, because it doesn't play 30 times a day on the cable news channels, is what was happening in the rest of the room. You don't see the visual and you don't hear the audio. The television crews recording the event plug into an audio source picking up Dean's microphone, not the sound of the room. The cameras focus in to a tight shot of the candidate, not the rest of the room.

What you are not hearing is a room with thousands of people screaming and cheering.

What you are not seeing are hundreds upon hundreds of American flags waving.

What you are not hearing are members of the audience shouting out state names urging Dean to list more.

What you are not seeing is the way Dean's supporters were lifted out of their slump by the speech.

In a nutshell, you are not seeing that Dean's speech fit the tone of the room.

Not that the speech was a good idea; clearly it has created problems for Dean, but not because he's a loose cannon or a little off kilter. Dean is actually a rather straight-laced, staid person. The Iowa speech has become a problem because Dean's aides either failed to recognize or failed to convince their candidate that when he speaks to a roomful of people, he is not speaking to a roomful of people: he is speaking to a television camera.

That camera might pick up an entire speech, but it will only disseminate sound bites; quick, interesting, entertaining, news-making sound bites.

For months, pundits have been suggesting that the only person who could stop Howard Dean is Howard Dean. And pundits like to be right. Add to that the antagonistic relationship the campaign has built with the press due to messy, amateurish entrances and exits to events; volatile and poorly planned "drop-by" campaign stops; and a general void in the communications department, and what you get is a press corps ready to pounce on anything the governor offers.

But let's, for a second, look past the fun-poking of morning radio shows that can isolate an audio clip, past the desperate programming needs of the cable nets and past the uncreative labels pundits like to places on pols. Let's, just for a second, acknowledge what the Iowa concession speech really was. Dean himself chuckled throughout the speech, clearly recognizing that he was serving up some red meat bloody rare. Dean was throwing a bone to his supporters. He was lifting them up after a devastating and unexpected loss. This is not the campaign's spin – it is their flaw.

Dean's Iowa speech demonstrates in one clear cut example how unprepared his campaign was for the transition from the early days of fluffy feature stories to the days of microscopic scrutiny and unrelenting news cycle repetition. And now they're paying the price.

Dean will try to reverse course with a media trifecta. According to one aide within the campaign, his goal was to appear as the "idea man" during the last pre-primary debate; as the "personal man" during his interview with Diane Sawyer; and as the "big man" who can poke fun at himself with a Top Ten list on "the Late Show with David Letterman."

Will the cable nets take the bait and give Dean the new cycle his staff so desperately craves? If not, campaign manager Joe Trippi will have to pull another rabbit out of his hat. Lemonade stands aren't likely to go over well in New Hampshire this time of year. And the candidate announcing to the world that he has "warts," even if he means it figuratively, isn't likely to play well either.