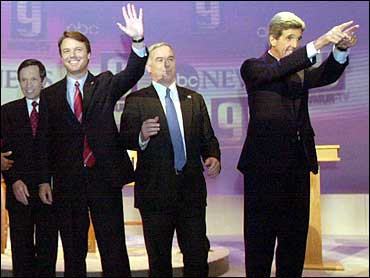 With Dean standing alone, the other candidates said Gore's backing is not a direct ticket to the party's nomination.

"To quote another former Democratic leader, I think elections are about people, not about the powerful," said Wesley Clark. "I think it was Al Gore who said that."

Dean fired back: "If you guys are upset that Al Gore is endorsing me, attack me, don't attack Al Gore. ... I don't think he deserves to be attacked by anybody up here. He doesn't; he's not a boss. He's a fundamentally decent human being. We share a lot of values."

Advisers said Dean welcomed the opportunity to defend Gore, who won the popular vote but lost the disputed 2000 contest and has become a living symbol of what many Democratic activists believe was a stolen election. Better yet, criticism of the endorsement left room for few other attacks on Dean, his policies or his missteps on the campaign.

"It was not the pile-on that Dean expected. Dean came with his best Teflon suit, but he didn't need it," said Donna Brazile, a former Gore adviser who is not tied to any of the candidates.

Dean was asked Wednesday on CBS News' The Early Show how Gore's endorsement helps him.

"He got 500,000 more votes than the person who ended up in the White House, so I think he's a pretty well-respected figure," Dean said. He added that Gore had been "enormously helpful to me in advising me on some key Issues," including the environment, national defense and foreign policy.

But there were few signs of party unity at the debate, as the rest of the field argued for their relevancy.

"This race is not over," declared Sen. John Kerry of Massachusetts, weeks before the first votes are cast in Iowa's Jan. 19 caucuses and New Hampshire's Jan. 27 primary.

The response to Gore's stunning decision was precipitated when one of the debate's moderators, ABC's Ted Koppel, opened the session by inviting the field of nine candidates to "raise your hand if you believe that Governor Dean can beat George Bush."

Only one, Dean, raised his hand.

Joe Lieberman, Gore's spurned 2000 running mate, asserted that "my chances have actually increased today." The Connecticut senator said people had stopped him in the airport to express outrage over Gore's backing of Dean.

Calling himself a champion of the moderate, fiscally conservative, tough-on-security wing of the Democratic Party, Lieberman said, "Howard Dean — and now, I guess, Al Gore — are on the wrong side of those issues."

Al Sharpton said Gore's tactics smacked of "bossism," and added: "We're not going to have any big name come in now and tell us the field should be limited. ... No Democrat should shut us up today."

And Rep. Dick Gephardt of Missouri declared, "I'm sure all of us think we have the best chance to beat George Bush." But, he said, he stood a better chance than the others in the battleground states of the Midwest that would likely decide the nomination.

The nine candidates stood at wooden podiums arranged in a semicircle on the stage of a theater on the University of New Hampshire campus. Some Democrats have suggested that the debates have been unwieldy and should be limited to the major candidates. One of the long-shot candidates, Rep. Dennis Kucinich of Ohio, took exception to Koppel's questions and used them to challenge the political status quo.

As the debate focused on other topics, Dean was asked about public comments about what President Bush might have known before the Sept. 11 attacks. Several Republicans have criticized him for mentioning speculation in several broadcast interviews that Mr. Bush may have been tipped off about the attacks, perhaps by the Saudis.

He insisted he never believed such reports, and was just mentioning "the most interesting theory that I heard, which I did not believe, (which) was that the Saudis had tipped him off."