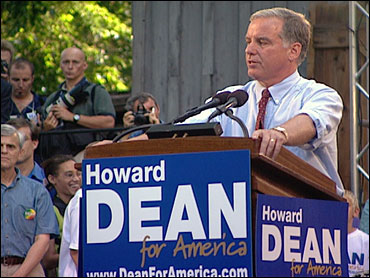 Democratic presidential candidate Howard Dean said he wants Osama bin Laden to get the death penalty, seeking to minimize fallout from a New Hampshire newspaper story in which he was quoted as saying the terror leader's guilt should not be prejudged.

In a wide-ranging interview Friday with The Associated Press, Dean also assailed the Bush administration for failing to set up a livestock tracking system he said could have averted the current mad cow scare and said he supports federal aid to help the American beef industry weather the storm.

The former Vermont governor, who solidly leads the field of Democratic presidential candidates in both polls and money, said he was simply trying to state in The Concord Monitor interview published Friday that the process of trying bin Laden needs to be fair and credible.

In that interview, Dean was quoted as saying, "I still have this old-fashioned notion that even with people like Osama, who is very likely to be found guilty, we should do our best not to, in positions of executive power, not to prejudge jury trials."

Dean told the AP in a phone interview that sentiment doesn't mean he sympathizes in any way with the al Qaeda leader. "I'm just like every other American, I think the guy is outrageous," he said.

"As a president, I would have to defend the process of the rule of law. But as an American, I want to make sure he gets the death penalty he deserves," Dean told the AP.

Dean also weighed in for the first time on the news earlier this week that a cow in Washington state has tested positive for mad cow disease, the first such case in the United States.

The former governor, whose state has a large dairy cow population, said the Bush administration failed to aggressively set up a tracking system that would allow the government to quickly track the origins of the sick cow, quarantine other animals it came in contact with and assure the marketplace the rest of the meat supply is safe.

"What we need in this country is instant traceability," he said.

Dean said such a system should have been set up quickly after the mad cow scare that devastated the British beef industry in the mid- to late-1990s. The Bush administration was still devising its plan when the sick cow was slaughtered Dec. 9, and on Friday the government still hadn't determine the infected animal's origins.

"This just shows the complete lack of foresight by the Bush administration once again," Dean said. "This is something that easily could be predicted and was predicted."

Dean said as a result the beef industry will suffer enormously. Officials said Friday 90 percent of the foreign markets for American beef have been closed off because of the announcement.

Asked if he supported a federal economic aid package for the industry, Dean said: "The answer is, yes, of course I do. The question is how much? And we don't know how much yet."

Dean said the government's first job, before the economic damage is calculated, must be to "close down that impact as soon as possible" by tracing the cow's origins and credibly reassuring the American public and the world that the rest of the U.S. beef supply is safe.

As a doctor, Dean said he was more concerned about the impact of the announcement on the U.S. economy than on public health. "The truth is this is going to have a minimal health impact," he said.