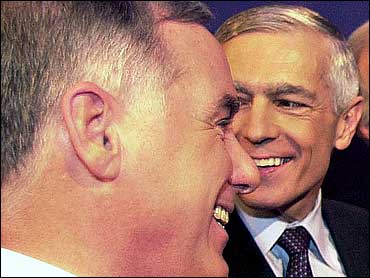 Howard Dean, the front-runner for the Democratic presidential nomination, said Monday that retired Army Gen. Wesley Clark would make a fine running mate, but he hasn't asked him to be vice president.

"I think that would be very presumptuous of me, since not one vote has been cast in the Democratic primary," Dean told reporters, following an endorsement by the Communications Workers of America local that represents 1,800 Verizon workers in New Hampshire and Vermont.

Clark responded to Dean's denial of the vice presidency offer in an interview with The Associated Press Monday.

"Why is he squirming? Because maybe he's done the same for a lot of other people. I can't prove it. I'm just hypothesizing," Clark said. "I can't imagine he'd be denying it unless there'd be some reason for him to."

Dean said he and Clark met several times before Clark declared his candidacy in September. He would not characterize the conversations.

"We got along well," Dean said. "He gave some good advice" on foreign policy. "I gave him some advice on domestic policy. … And I did not and have not offered anyone the vice presidency," Dean said.

On Sunday, Clark, in a taped appearance on ABC, said Dean made the offer in September, before Clark decided to run for president.

Clark said it happened during a meeting with Dean "and frankly … and I told him, I said, 'I'm not really interested in even talking about it,'" Clark said.

Also Sunday, Dean said during a campaign stop in New Hampshire that he did not have enough foreign policy experience on his resume, and planned to address that through his choice of a running mate.

But Dean's campaign manager, Joe Trippi, denied an offer had ever been made to Clark.

"That's not what happened," said Trippi, also appearing on ABC. "We had a great relationship with him, talking about advice on the war and other things. … But that never came up."

"Howard Dean did in fact offer Wes Clark a place on the ticket in a one-on-one meeting that Trippi did not attend," spokesman Matt Bennett said. "Joe Trippi shouldn't comment on meetings he wasn't invited to."

Whether or not Dean made the offer before Clark entered the race, Dean could still offer the No. 2 slot to the retired general if Dean wins the nomination.

It is fairly rare for a presidential candidate to pick his running mate from the pool of also-rans, but it has occurred. In 1980, President Reagan selected George H.W. Bush, whom he had defeated for the nomination.

Polls show Dean's chances of getting to pick a running mate increasing. He is gaining ground as the leading candidate in the Democratic presidential contest but he appears to be a substantial underdog in a hypothetical matchup against President Bush, a national poll released Monday says.

The ABC News-Washington Post poll found Dean, a former governor of Vermont, backed by 31 percent of Democrats and those who lean Democratic. All other candidates were in the single digits.

In a head-to-head matchup, Mr. Bush led Dean by 55 percent to 37 percent. Few in the poll, including Democrats, knew a great deal about Dean and his positions.

As Dean has gained strength, Democratic insiders have grown more concerned that he would have a difficult time in a general election matchup against Mr. Bush. Aides counter that Dean's strength in motivating new voters and using the Internet as a tool will be valuable.

The ABC-Washington Post poll of 1,001 adults was taken Dec. 18-21 and has a margin of error of plus or minus 3 percentage points, larger for subgroups like Democrats.