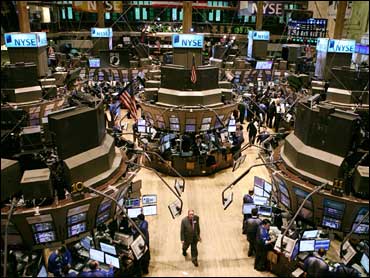 Stock marketeers were watching closely Friday to see how The Street would do after Thursday's wild ride.

At one point, the Dow Jones Industrial Average plunged nearly 1,000 points -- the most ever in one day -- before bouncing back just a few minutes later.

It all made for high anxiety among average Joes and market pros alike.

But on "The Early Show" Friday, CBS MoneyWatch.com Editor at Large Jill Schlesinger had words to the wise for average investors watching their equities, mutual funds and 401(k)s on roller coasters.

She points out to CBS News that, "If you have learned your lessons from the past two years, it's that having a long-term game plan and a diversified portfolio can soothe frayed nerves. Simple diversification of 40 percent stocks, 40 percent bonds, 15 percent cash and five percent gold would have shielded you from most of the damage" Thursday.

"That's the miracle of diversifiaction," she told co-anchor Harry Smith on the floor of the New York Stock Exchange. "With a diversified portfolio, you should be able to sleep pretty well at night."

"You shouldn't be freaked out" by days like Thursday," Schlesinger said. "Every day is a wild ride down here. ... The reality is, if you're a long-term investor ... if you stick to your game plan, you should be doing quite well."

If anything, Schlesinger added to CBS News, the lesson of Thursday and of the continuing concern over Greece's woes -- including the chance they could spread to other European nations with weak economies and perhaps even hurt the fragile budding recovery in the United States -- is that investors "can't afford to be complacent. Before this week, stocks had recovered around 75 percent from their bottom of March 2009. We've gone all that way without one single 10 percent correction or pullback. Corrections are normal and expected in any bull market so, whether it's Greece or some other catalyst, it's not surprising for stocks to take a breather."

Investors, she advises, should "have a plan to monitor their investments on a regular basis. I would say they should review and rebalance their portfolios quarterly: That is a great way to force yourself sell high and buy low!"

Schlesinger says investors can use market blues as a buying opportunity. After all -- such doldrums mean shares get less expensive. But, she stresses -- the same suggestions hold -- diversify, monitor and keep reallocating.

Asked about comparisons of Thursday's extreme zigzagging to what happened right before the collapse of Lehman Brothers, Schlesinger observed that, "Greece is important in the same way Bear Stearns or Lehman was important -- in and of themselves, they seem small, but the interconnected financial system means little blips can cascade into bigger problems for the globe. Friday is important not only because of what's happened in the past week, but because of the release of April's unemployment numbers. As much as we have to pay attention to Greece, we also need to be mindful of the overall economy and the very nascent recovery that is under way."