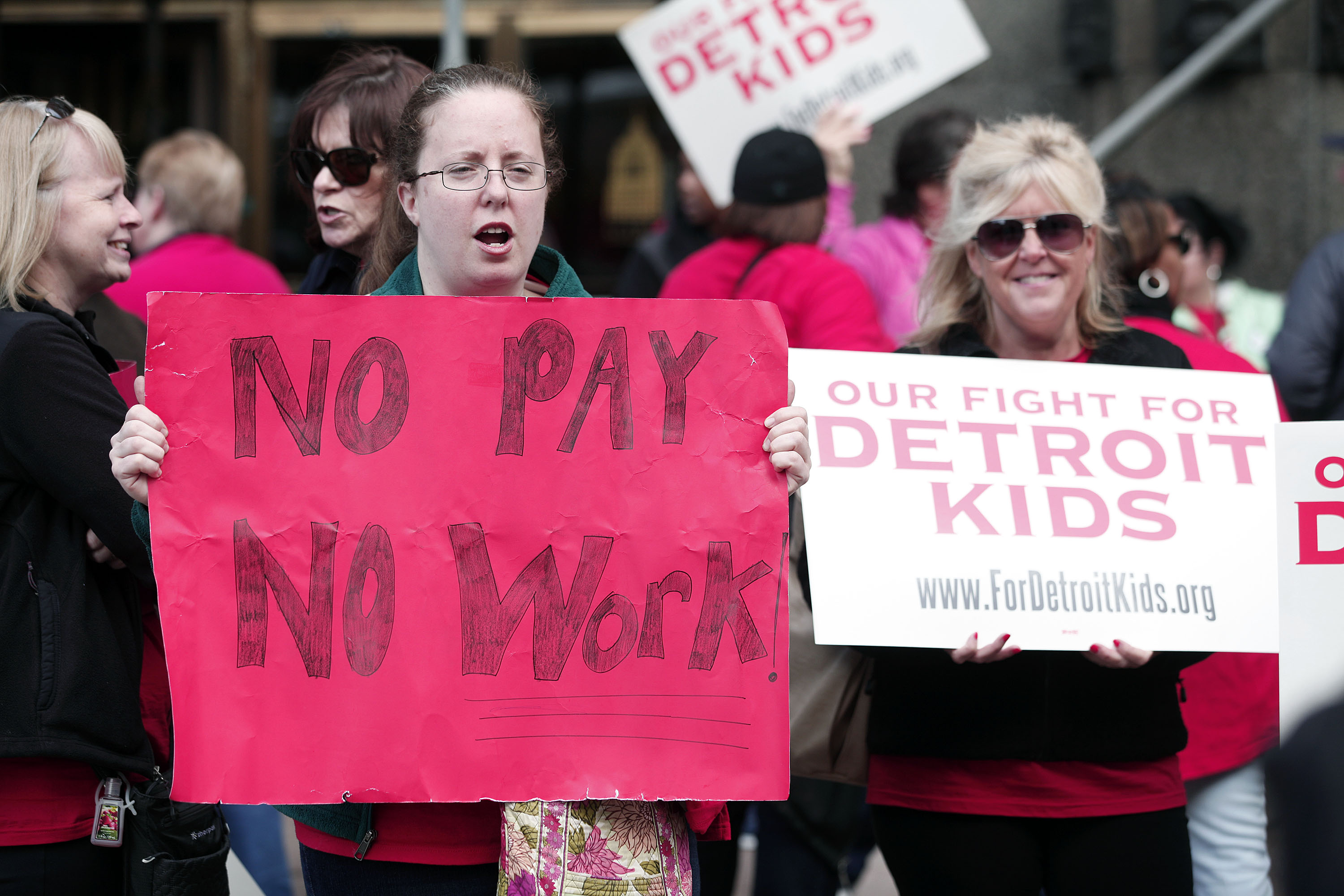 DETROIT -- Teachers who closed Detroit schools for two days by calling out sick announced Tuesday that they would return to the classroom after receiving assurance from the district's manager that they would be paid.

The move by the Detroit Federation of Teachers came hours after Michigan lawmakers advanced a $500 million plan to restructure Detroit public schools by creating a new district.

The vote was intended to ease teachers' fears that they might not get paid if the district runs out of money. But the union quickly blasted the legislation endorsed by the House Appropriations Committee. It would forbid existing labor agreements from transferring to the new district and restrict collective bargaining over work schedules and school calendars.

Terrence Martin, the union's executive vice president, said the union was "truly outraged" by the proposal. He said the measures heading to the full House "feel like and look like anti-teacher bills" and differ radically from legislation approved in March by the Senate that he described as "workable."

"It's just a testament to how far apart lawmakers are right now.... (It's) very discouraging to our membership," Martin said. "We'll continue to fight."

The union said it would encourage members to go back to school Wednesday based on discussions with the district's state-appointed transitional manager, Steven Rhodes.

The sick-out idled 45,000 children and presented yet another crisis with racial overtones for a governor and Legislature already engrossed in the water emergency in Flint, a majority-black city like Detroit, where many residents have complained about being treated like second-class citizens.

"Teachers, you're going to get paid," Republican House Appropriations Committee Chairman Al Pscholka said before the panel approved the plan over objections that it would not be enough money and also hurt the teachers union.

The proposal that passed mostly along party lines would retire the district's enormous debt by 2023 and launch a new district in July. It would spend less than a $700-plus million plan approved by the Senate in March.

The GOP-led House could vote on the idea later this week. But big differences would still need to be resolved with the Republican-controlled Senate. It was unclear how quickly that could occur before the Legislature adjourns for the summer in mid-June.

On Tuesday, the district closed 94 of its 97 schools -- the same number that canceled classes on Monday, when more than 1,500 teachers did not show up for work.

"We want to be in school teaching children," said Randi Weingarten, national president of the American Federation of Teachers, the union that represents Detroit teachers. "But you cannot in good conscience ask anybody to work without a guarantee they're going to be paid."

The district -- considered the worst academically of its size in the country -- has been under continuous state oversight since 2009. It has been led by a series of financial managers who have confronted debt and enrollment that has declined to a third of what it was a decade ago.

Current transition manager and former federal judge Steven Rhodes, who oversaw the city's bankruptcy, warned over the weekend that nearly $50 million in emergency spending that the state approved in March will run out by June 30.

Teachers opting to have their pay spread over 12 months instead of the course of the school year would not receive paychecks in July and August without more help from the state.

The seven-bill plan aims to ensure that the newly created district could spend more on academics if freed of debt payments equaling $1,100 per student.

But Republicans and Democrats remain at odds over issues such as how much state money is needed and how to create a special commission to open and close schools, including publicly funded charters.

Also unresolved is the question of when an elected school board would take power and if a financial oversight commission would have a say in hiring a new superintendent.

"There's a lot of money on the table here, but my concern is, is it the right amount of money?" Roberts asked. "Are we actually solving the problem and what I'm hearing from you is, you don't know if it does."

"That's right," replied Osborne, "we haven't had a chance to evaluate the specifics."

"And that's the position of the treasury department - we can't even support these bills right now because you don't even know if it solves the problem," said Roberts.

"We're putting a band-aid over a gunshot wound over and over because we don't have accurate numbers and the state is responsible for this district currently -- it's under emergency management -- and there is no emergency that has been managed in the last 10 years," said Durhal.

"They are despicable," said Poleski of the sickout action by the teachers, "to use the foulest adjective I can think of, to apply to someone who would consider themselves a professional. Their actions have been grossly unprofessional - it is educational malpractice."

Rep. Henry Yanez, a Democrat, characterized the legislation as "bald-faced union busting." Other Democrats questioned why it would provide only $33 million for start-up costs and cash flow when $200 million is required.

The mass sick-outs that started late last year with just a small group of teachers, however, angered Republicans who complained that the protest did not help their efforts to pass the bills. Four bills won approval on narrow 15-14 votes.

But one parent who was missing work because her daughter has been shut out of class said the blame for the district's financial maladies falls on the shoulders of the state, not the teachers.

Teachers "have been doing the best that they can with the resources that they have," said Monique Baker McCormick, whose daughter is an 11th-grader at Cass Tech. "They're just trying to survive themselves off of what little they get. So I don't blame them at all for fighting for what they deserve."

Asked if President Barack Obama supports the sick-outs, White House spokesman Josh Earnest said Tuesday that he was "deeply concerned" that students were not being educated and urged teachers and local officials to "resolve their differences so that kids can get back to school."