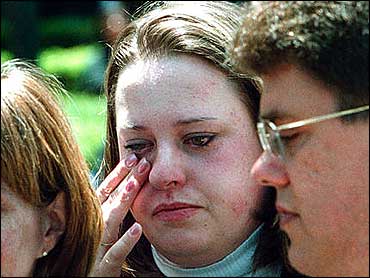 A former Gallaudet University student faces the possibility of life in prison after a jury rejected his insanity defense and convicted him of murdering two classmates.

Joseph Mesa Jr., 22, sat silently Tuesday as a sign language interpreter informed him he had been found guilty of 15 separate charges. Sentencing will be July 10.

Along with the murder counts, Mesa was convicted of stealing from the dead men. Eric Plunkett, 19, of Burnsville, Minn. was killed Sept. 28, 2000. Benjamin Varner, 19, of San Antonio, Texas, was killed Feb. 1, 2001. Each was found dead in a freshmen dormitory at the liberal arts college for the hearing impaired.

"This really was a tragedy for Gallaudet and the whole deaf community," said Assistant U.S. Attorney Jeb Boasberg. The prosecution turned back efforts by Mesa's attorney to portray the Guam native as a mentally ill man who thought a pair of black hands were telling him to do bad things.

"An insanity defense doesn't work if you're not insane," said Boasberg.

"A very dangerous individual has been removed from the community," said Jennifer M. Collins, another prosecutor.

The jury deliberated about three hours after sitting through three weeks of testimony from 40 witnesses and viewing 80 exhibits of evidence, including Mesa's videotaped confession.

Members of the victims' families embraced and shook hands with prosecutors in the courtroom after the verdicts were announced.

"Joseph will never be able to do this to any other family," said Diane Varner. Just weeks before her son was stabbed to death with a paring knife, he lent Mesa $60 to buy Christmas gifts for his girlfriend and family.

Defense attorney Ferris R. Bond indicated he would appeal based on circumstances surrounding Mesa's four-hour videotaped confession and the use and accuracy of interpreters who worked with police. Bond also questioned whether Mesa properly waived his right to legal counsel before talking to police.