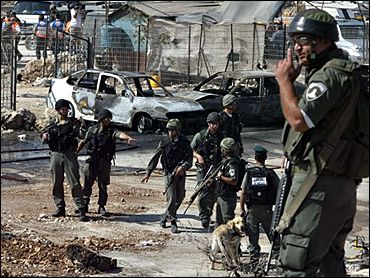 Palestinian militants detonated explosives near a busy checkpoint north of Jerusalem on Wednesday, killing two Palestinian men and wounding 13 people, including both Israelis and Palestinians, in the first bombing attack in a month.

The Al Aqsa Martyrs' Brigade, a violent group with ties to Yasser Arafat's Fatah movement, claimed responsibility but said its original intention was not to bomb the checkpoint, through which thousands of Palestinians pass every day.

The intention was to carry out an attack in Jerusalem, but the man carrying the 44 pounds explosives had to abandon them near the checkpoint as security forces closed in, Zakariye Zubeydi, 29, a leader of the group, told The Associated Press.

"We found ourselves forced to detonate it (the bomb) at the spot," Zubeydi said.

Zubeydi said the group is sorry for the Palestinian casualties. He said Al Aqsa said it carried out the bombing to avenge the killing of a leader by Israeli troops in the West Bank last month.

It was not clear what happened to the man who detonated the blast. In setting off the explosives, he would have known there was a high probability of Palestinian casualties.

In other developments in the Mideast: