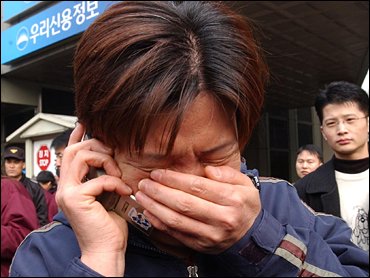 Kim Ho-keun, a 68-year-old grandfather, was about to get off the crowded subway when an explosion knocked him to the floor. He awoke in darkness minutes later, gasping for breath and desperate to escape a fiery attack that killed 120 people on Tuesday.

Struggling to call for help, Kim feared the worst until he heard a rescue worker's voice.

"I couldn't see him, but I saw his flashlight, so I grabbed his hand," Kim said from his hospital bed, tubes supplying him with oxygen. "It was then that I thought to myself: I'm going to live."

Kim was one of the fortunate in Daegu, South Korea's third-largest city.

The fire started about 10 a.m. when a man lit a container of flammable liquid and tossed it. The blaze incinerated two six-car subway trains, killed 120 people and injured 138, many of them seriously.

It was an eerie and sad reminder of what happened in the U.S. on Sept. 11, reports CBS News Correspondent Barry Petersen, with people with cell phones calling loved ones, one man begging his wife, "Help me! There's a fire and the doors are locked."

Rescue workers gave up the search for survivors by the afternoon.

A suspect who police say has a history of mental illness was under interrogation. Police said they did not know what motivated the attack or what substance the attacker used to start the blaze.

The fire began in one train at a station, igniting seats and spreading to another train as it pulled in, officials said. More people died in the second train because many of the doors failed to open, trapping passengers.

Lim Dae-yoon, chief of Daegu city's east district municipal government, estimated the number of people killed at 120. "We believe the death toll will not rise drastically from that," Lim said.

Many bodies were burned beyond recognition. Officials said they would have to wait for DNA tests to confirm the number of dead, which could take weeks.

Other people died of asphyxiation on the train platform. One man said his missing daughter called by mobile phone to say there was a fire and the subway door wasn't opening.

Firefighters gave horrifying accounts of the scene underground. Many bodies were found on the subway stairs, where people apparently suffocated as they tried to escape. On the platform and in the trains were the ashen bones of those trapped in the flames.

Chung Sook-jae, 54, rushed to the scene after her daughter, 26-year-old Min Shim-eun, telephoned her husband to say she was choking. Then the line went dead.

"She never caused any problems. She was a good kid. Why does this have to happen to her?" Chung cried. "If she's not out by now, she's probably dead. What am I going to do if her body is all burned out of recognition?"

Officials said that the fire was put out by 1 p.m., about three hours after it started, but toxic gas from the fire delayed rescue efforts, according to the Yonhap news agency. The acrid odor of burned plastic wafted over the scene hours after the flames were extinguished.

Police were interrogating Kim Dae-han, 56, who witnesses said carried the carton into the subway car, police Lt. Kim Byong-hak said. Another official, speaking on condition of anonymity, said the suspect had been treated for mental illness in the past.

Authorities and witnesses said the attacker took out the carton and tried to light it with a cigarette lighter. Passengers moved to stop him and a scuffle broke out. He finally lit the box, and it exploded into flames.

YTN aired footage of the frantic scene inside a hospital, showing nurses attending to a man who reportedly was the suspect. The man sat frowning on a bed wearing a hospital smock, his face and hands smudged with soot.

Police Sgt. Yu Heung-soo said Kim had been burned on both legs and the right wrist. But a doctor told YTN that the man's only injury was from smoke inhalation.

YTN, without citing sources, also reported that the suspect worked as truck driver and had once threatened to burn down the hospital where he had received unsatisfactory treatment.

In the minutes after the fire began, thick black smoke billowed out of the subway's ventilation shafts. Downtown traffic came to a standstill as ambulances and firefighters wearing orange suits and oxygen tanks rushed to the scene.

Rescuers brought victims, their faces and clothes black with soot, up to the street in stretchers and slid them into ambulances. Relatives massed at the site, many wailing in grief.

Lee Hyung-hwa, a doctor at Kwak hospital, near the attack site, said that most of the victims at his hospital suffered from smoke inhalation and were at risk for developing pneumonia and lung damage.

"It will take at least a week to see how their symptoms develop," he said.

Kim Ho-keun, with his wife and granddaughter at his side, said his survival was bittersweet.

"I'm so happy to see my family again, but my heart aches thinking about the people who died," he said.

Daegu, one of the 10 World Cup soccer venues last year, has a population of 2.5 million.