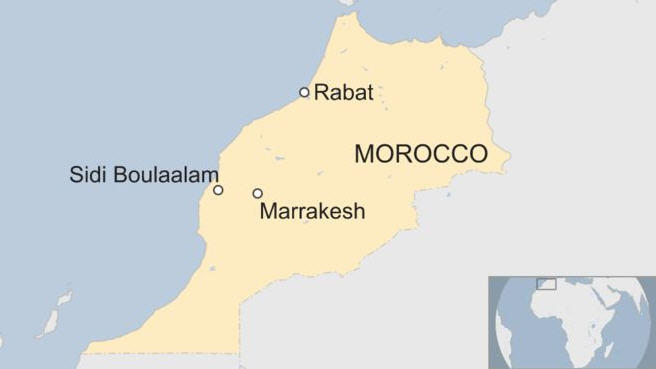 MARRAKECH, Morocco -- A stampede erupted while food aid was being distributed in a Moroccan village Sunday and at least 15 people died and 10 were injured, authorities said.

The crush took place in Sidi Boulalam as a local association was handing out food at a local weekly "souk," or market, the Interior Ministry said in a statement. The town is in Essaouira province, which abuts the Atlantic coast southwest of Casablanca.

King Mohammed VI has given instructions that "all measures be taken to help the victims and their families," the ministry said. The king will pay for the hospitalization of the injured and burials of the dead, the statement said.

Alyaoum24.com, a reliable local news website, reported that people were rushing for the food aid whose value was about $16 per person.

BBC News reports that pictures posted on social media show women's bodies laid out on the ground. An uncofirmed video shot by a witness before the incident showed a large crowd gathered at the open-air market, waiting for the food distribution.

A reason why the stampede was triggered wasn't immediately known.

Regional health director Khalid Zenjari told The Associated Press that six of the injured were evacuated to the city of Essaouira, about 35 miles away, while four were treated locally.

BBC News adds that many of the injured were women or elderly.

Distribution of food aid is common in the North African nation, particularly in remote areas. The handouts are organized by private sponsors and groups as well as by the authorities.

Often held once a week in rural areas, souks are usually very busy places. People from nearby villages come to the markets to buy food and others items for the following week.

A drought has greatly hurt agricultural output in Morocco recently, contributing to the high cost of basic food items.