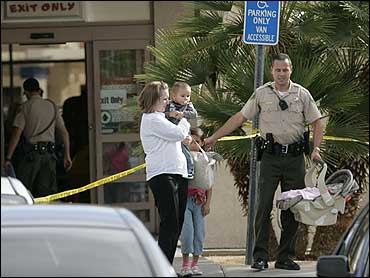 The shooting occurred in a crowded toy store on the traditional start of the holiday shopping season, but authorities say it wasn't related to the bargain-hunting frenzy. Instead, two men pulled guns and killed each other after the women with them erupted into a bloody brawl, witnesses said.

Authorities released few details about the mayhem that broke out at the Toys "R" Us store around 11:30 a.m. Friday, sending scared shoppers fleeing. Riverside County sheriff's Sgt. Dennis Gutierrez said the fight was not over a toy and that handguns were found by the men's bodies. He refused to say whether the shooting was gang-related.

The victims were identified as Alejandro Moreno, 39, of Desert Hot Springs, and Juan Meza, 28, of Cathedral City. No one else was hurt.

Witnesses Scott and Joan Barrick said they were checking out of the store when the brawl began between two women, each with a man. The women were near the checkout area, but the Barricks did not think the women had purchases.

One woman suddenly started punching the other woman, who fought back as blood flowed from her nose, said Scott Barrick, 41. The man who was with the woman being punched pulled a gun halfway out of his pocket, then shoved it back in, he said.

"He pulled his gun right next to me. I turned to look for my wife, and she was already hiding," Scott Barrick said.

The other man pulled a gun and pointed it at the first man but forgot to cock it, Scott Barrick said. The first man tried to run but was blocked by the line of people, then ran back toward the store's electronics section as the other man fired his gun, he said.

The first man reached a dead-end in electronics, turned around and ran toward an exit, pulling his gun and firing back, Scott Barrick said.

"He went up to the cash register, he went to put his hand on the thing and he just went phoomp," he said, indicating the man fell.

He said he did not see what happened to the other man.

"I think the obvious question everyone has is who takes loaded weapons into a Toys "R" Us?" he said. "I doubt it was the casual holiday shopper."

Ray Turner, 20, said he was two aisles away when two women began shouting and screaming at each other and he had a clear view of the fight until a crowd clustered around them. Both women had children, he said.

"We thought it was just a fight and then someone yelled: `He's got a gun! He's got a gun!' You really couldn't see nothing because there was a crowd," Turner said.

Rafael Gomez, 11, said he and his father had been in the store about 20 minutes before the shooting but were in a nearby Pizza Hut when they saw people pouring out of the store screaming.

"We just saw them running and crying. I was kind of scared," Rafael said. "We got lucky."

Toys "R" Us issued a statement expressing outrage over the violence.

"We are working closely with local law enforcement officials to determine the specific details of what occurred," the statement said. "Our understanding is that this act seems to have been the result of a personal dispute between the individuals involved. Therefore, it would be inaccurate to associate the events of today with Black Friday."

Palm Desert is a resort town about 120 miles east of Los Angeles.