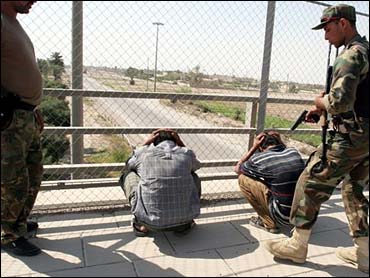 U.S. and Iraqi troops battled foreign fighters near the Syrian border and found the body of Anbar province's missing governor, the highest-ranking Iraqi official kidnapped since the fall of Saddam Hussein, authorities said.

Tuesday's announcement came as the Shiite-dominated parliament reached out to Iraq's disgruntled Sunni Arab minority by offering a role on the committee drafting a new constitution.

But in a development that could affect efforts to get Shiites and Sunnis working together, President Jalal Talabani said Saddam, a Sunni, could be put on trial in the next two months. The former dictator's lawyers said they knew nothing about that.

Foreign extremists are thought to be a small portion of the Sunni-dominated insurgency, although they are blamed for some of the worst bombings and other bloodshed that have killed 765 Iraqis in the month since the new government took power.

Officials said the body of Anbar Gov. Raja Nawaf Farhan al-Mahalawi was found Sunday after troops engaged in a fierce firefight with foreigners holed up in a house in Rawah, a desert village 175 miles northwest of Baghdad.