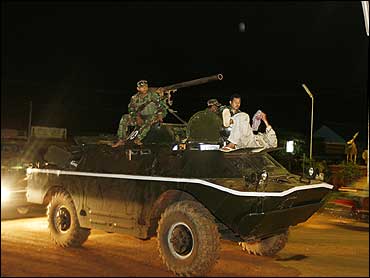 Tensions between Thailand and Cambodia over a border area near a historic temple erupted in a deadly gunbattle, prompting officials on both sides to quickly call for resolving the conflict through talks, not bullets.

Cambodian Foreign Minister Hor Namhong said military officials from both sides would meet Thursday in Thailand to discuss the previous day's clash, which killed at least two Cambodian soldiers and wounded a total of eight from both sides.

"If there is violence, we have to negotiate," Somchai said.

Many Thais feared their country's claim over nearby land would be undermined, and anti-government protesters have pressed their government to take a harder line on the border conflict, seeking to discredit its patriotic credentials. The protesters have sought the ouster of Thailand's ruling party, occupying the grounds of the prime minister's offices for the past two months.

The fighting Wednesday afternoon lasted for about an hour, with each side accusing the other of firing first.

The battle killed at least two Cambodian soldiers and wounded three others, according to Cambodia's Foreign Ministry. Five Thai soldiers were wounded, the Thai army said.

Thailand's Foreign Ministry said Thai soldiers were peacefully patrolling their own territory along the border when Cambodian soldiers shot at them with rocket propelled grenades and submachine guns.

The fighting was the latest flare-up in a decades-old dispute over a stretch of jungle near the 11th century Preah Vihear temple. The World Court awarded the temple to Cambodia in 1962, but sovereignty over surrounding land has never been clearly resolved.

Thailand had grudgingly accepted Cambodian sovereignty over the temple with few armed confrontations until this year. But resurgent Thai nationalism sparked by the anti-government protesters put Bangkok authorities under pressure to aggressively pursue the land claims.

Both sides sent hundreds of troops to the area after the UNESCO action, and the dispute also fired a surge of nationalism in Cambodia that helped propel Cambodian Prime Minister Hun Sen to a landslide re-election victory in late July.

Most troops were withdrawn from the area a month later.

But the conflict flared again in recent weeks. A brief gunfight earlier this month wounded one Cambodian and two Thai soldiers. Three days later, two Thai soldiers lost legs when they stepped on land mines in the area.

Charnvit Kasetsiri, a historian who has written extensively on the dispute, said the fight over the temple had long been a proxy for larger conflicts, including World War II and the Cold War, but it had been considered resolved until recently.

"The issue surrounding Preah Vihear temple was over decades ago until it was fanned by nationalist rhetoric for domestic political purposes," he said.