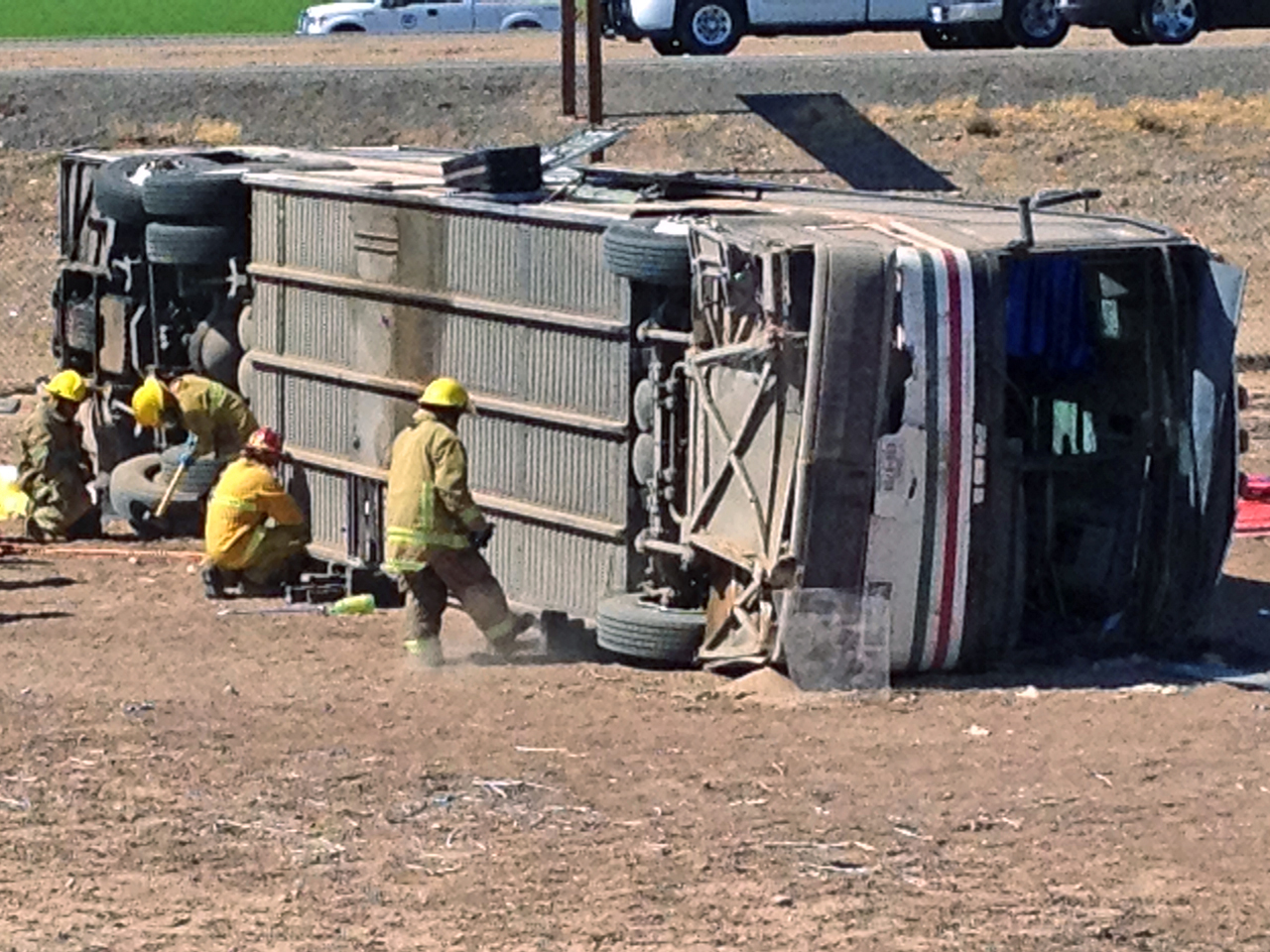 BLYTHE, Calif. -- A tractor-trailer spilled a load of steel pipes onto a highway, triggering a bus crash Wednesday that killed four people and seriously injured at least seven others on the main road linking Southern California and Arizona, authorities said.

The crash occurred around 2:15 a.m. on Interstate 10, just west of Blythe near the Arizona border, where the eastbound truck jackknifed onto the median and spilled its cargo into all lanes in both directions, according to the California Department of Transportation.

The westbound bus either swerved to avoid the pipes or struck them and overturned, sliding across the shoulder and 50 feet down a slight embankment, said Terri Kasinga of the transportation department. The bus, with 32 people aboard, was traveling overnight on an 800-mile route from El Paso, Texas, to Los Angeles.

"I hit the ceiling, and when I came back down I landed on top of a guy that was dead, and this is the blood that I have, his blood on me," passenger Caesar Castillo told CBS Los Angeles. "... I'm freaking out, and everybody's screaming, so I'm like, all right, we gotta get out of here."

Two passenger vehicles in the eastbound lanes also crashed, but nobody was hurt in those crashes.

The four fatalities were aboard the bus, Kasinga said.

Seven seriously hurt bus passengers were taken to hospitals, and 14 others sought evaluation of minor injuries such as bumps and bruises, according to California Highway Patrol Officer Jason Gerard.

The driver of the bus was unhurt. The remaining passengers were taken to Blythe to be interviewed by investigators.

Signs on the interstate urged drivers to find alternate routes, though by diverting traffic onto frontage roads officials were able to keep traffic moving around the accident scene in both directions. All lanes of the interstate were to remain closed until at least Wednesday afternoon, Kasinga said.

The company received a "satisfactory" safety rating as of its last review in February, according to federal inspection records. Other records kept by the Federal Motor Carrier Safety Administration show the company has 55 vehicles, five of which have been involved in crashes since June 2012. One of the crashes involved a single death, and one person was injured in another.

A message seeking comment from the bus company was not immediately returned.

The truck driver was unhurt. The tractor-trailer had an insignia for VG Transport of Rialto, California, Gerard said.

According to the federal safety records, VG Transport has not been involved in any crashes reported to state officials over the past two years. Those records say the company has only one truck.

The truck passed three inspections over the past two years, though the driver was not allowed to continue working after one of those inspections for reasons that were not immediately clear.

The man listed as the contact for VG Transport could not be reached for comment. No one picked up at the listed phone number, and the voice mail box was full.

Blythe is a city of about 25,000 people in eastern Riverside County, about 225 miles east of downtown Los Angeles.