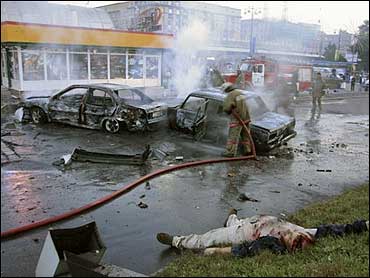 A woman strapped with explosives blew herself up outside a busy Moscow subway station Tuesday night, killing at least 10 people and wounding more than 50 — the second terrorist attack to hit Russia in a week.

Seven days earlier, almost to the hour, two Russian jetliners crashed within minutes of each other in what officials say were terrorist bombings. All 90 people aboard the aircraft were killed, and the investigation has focused on two Chechen women believed to have been passengers.

The statement said Tuesday's bombing was the group's response to Russian President Vladimir Putin, "who slaughtered Muslims time and again." Putin has firmly refused to negotiate with the rebels in predominantly Muslim Chechnya, saying they must be wiped out.

Mayor Yuri Luzhkov told reporters near the Rizhskaya subway stop in northern Moscow that the bomber was walking toward the station shortly after 8 p.m. but turned around when she saw two police officers.

She "decided to destroy herself in a crowd of people" in a busy area between the subway station and a nearby department store-supermarket complex, Luzhkov said, adding that her bomb was packed with bolts and pieces of metal.

"There was a desire to cause maximum damage," he said.

Federal Security Service spokesman Sergei Ignatchenko told NTV television that the casualty toll had risen to 10 dead and 51 wounded, of whom 49 were hospitalized. Many of the injured were believed to be seriously wounded, and the death toll was likely to rise. It was not immediately clear if the number of dead included the bomber.

Television reports showed a white car engulfed in flames, shattered windows and bloodied people lying on the asphalt in front of the subway station.

A woman, apparently distraught with panic, pushed away a man who repeatedly reached out to help her. A man lying on his stomach moved his arm weakly as people crowded around him.

"There was a powerful blast and then a smaller one. I thought my roof would come off," said 30-year-old Sergei Pyslaru, who was driving on a nearby street.

Alexei Borodin, 29, was walking with his mother when he heard "a very powerful bang. Something flew past my head, I don't know what it was."

Borodin said he saw "about five people" who were too badly hurt to get up. "One young guy tried to get up and couldn't."

Suicide bombings blamed on Chechen secessionists have struck Moscow and other parts of Russia over the past several years. In February, 41 people were killed in a rush-hour explosion on the Moscow subway that officials said was a terrorist attack; in December a female suicide bomber blew herself up outside a hotel adjacent to Red Square, killing five other people.

Many of the Chechen female suicide bombers are believed to be so-called "black widows," who have lost husbands or male relatives in the fighting.

Chechens on Sunday elected a new Kremlin-backed president in the republic, a move Moscow hoped would establish some stability in the region where rebels have been fighting Russian forces on and off for more than a decade.

Alu Alkhanov, Chechnya's top police official, won with 74 percent of the vote, election officials said, after a campaign in which the six other candidates rarely appeared on television or radio and a leading opponent was kept off the ballot by pro-Moscow local officials.

Alkhanov will replace Akhmad Kadyrov, who was killed May 9 when a bomb ripped through a stadium in the Chechen capital, Grozny, during a Victory Day ceremony. As many as 23 others were also killed. A Chechen warlord claimed responsibility.

Bombings related to the Chechen conflict, many of them conducted by suicide attackers, have killed nearly 370 people in Russia in the past 21 months.