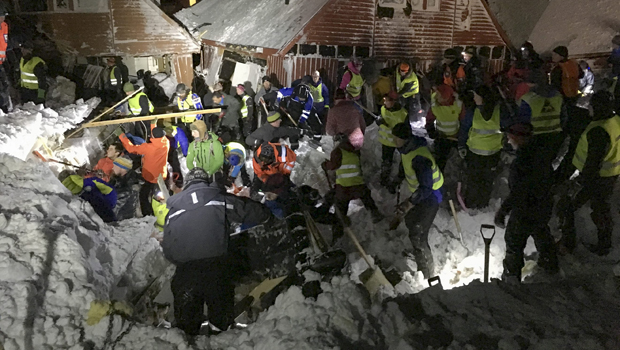 COPENHAGEN, Denmark -- An avalanche smashed into at least 10 houses Saturday on the remote Arctic archipelago of Svalbard, killing one man and sending nine other people to the hospital, authorities said.

Tons of snow tumbled down about 11 a.m. Saturday from Sukkertoppen mountain, which dominates Longyearbyen, the main settlement on Svalbard.

About 100 emergency workers and volunteers rushed to the scene, some with search dogs and head lamps, to look for victims. Using shovels or excavators mounted with powerful lamps that lit up the Arctic darkness, they frantically dug in the yards-deep snow that surrounded the houses.

During the winter, the remote archipelago plunges into Arctic darkness and the sun does not show above the horizon from late November to mid-February.

Dozens of other houses at the foot of Sukkertoppen were protectively evacuated, said Tone Hertzberg, a spokeswoman for the governor of Svalbard. She later said authorities had accounted for all of the area's residents.

One local man died and nine other people were hospitalized, including four children, hospital spokesman Per-Christian Johansen told The Associated Press, adding that two of the children and one adult were in serious condition.

The avalanche hit a day after a huge storm that the local paper called the worst in 30 years, with winds up to 60 mph. Hertzberg said "it would be logical" to assume the avalanche was connected to the storm late Friday.

Frank Jakobsen, a resident of Longyearbyen, told the Svalbardposten daily that the avalanche was so powerful it had moved several houses and had poured tons of snow into others.

He saw people carrying out 44-year-old Anne Kristin Jakobsen, who had been buried alive under the snow but had banged on a microwave oven to get the attention of rescue workers, according to the daily. Jakobsen was among those hospitalized.

Norwegian Prime Minister Erna Solberg wrote on Twitter that authorities were following the situation closely and "all available resources are mobilized."

The archipelago's hospital requested extra medical staff from the largest nearby hospital, in Tromsoe on the Norwegian mainland, and more rescue teams with search dogs.

The fierce storm Friday night also ripped off the roof of a school, sending it flying onto a soccer field. The airport in Longyearbyen was closed Friday but was expected to reopen later Saturday.

Svalbard, which sits more than 500 miles north of the Norwegian mainland, is known for its stunning snow-covered mountains, fjords and glaciers. Located midway between continental Norway and the North Pole, the archipelago has about 2,600 residents.