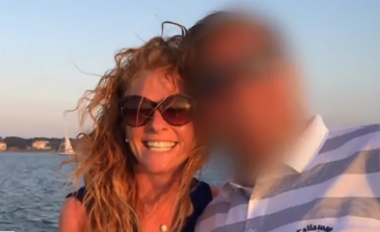 HILTON HEAD ISLAND, S.C. -- A 911 call reveals a witness' frantic attempt to describe a  fatal alligator attack on a woman in South Carolina. The woman, 45-year-old Cassandra Cline, was walking her dog in Sea Pines Resort on Hilton Head Island when she was attacked on Monday, state and local officials said.

In the call, a witness is heard describing the difficult moments, CBS affiliate WTOC-TV reported.

Dispatcher: "OK, you said she's being attacked by an alligator?"

Witness: "Yes, he dragged her in the water."

Dispatcher: "It's dragging her into the water?"

A police report said the witness was on the other side of the pond and that he didn't know how to help the woman, according to WTOC-TV.

Dispatcher: "Is anybody still out there with her?"

Witness: "There's one other person that's there... I mean what do you do? Do you jump in the water? I don't know?"

The police report from Beaufort County said that when authorities got to the scene, the woman -- a kindergarten teacher from upstate New York -- was found unresponsive.

The incident took place near the 13th hole of a golf course.

David Lucas, a spokesman for the South Carolina Department of Natural Resources, said earlier this week that the 8-foot alligator had tried to get the dog after coming out of the water. Authorities said the alligator engaged in a tug of war with Cline after getting a hold of the dog's leash.

The alligator was later found and killed, said Lucas. The dog wasn't hurt in the incident.