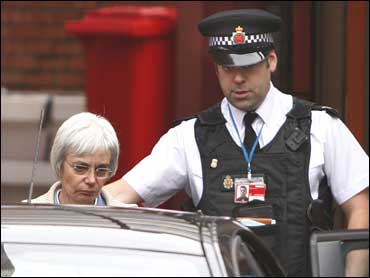 The wife of a not-so-dead canoeist returned home to a police welcome.

The 55-year-old had gone to Panama to start a new life with her very-much-alive husband whom everyone thought had died in a canoe accident five years ago.

John Darwin had recently resurfaced years after going missing and being declared dead.

Darwin walked into a London police station five years after his apparent death at sea, claiming amnesia. He was charged on Saturday with life insurance fraud and lying to get a false passport.

Police allege he masterminded an elaborate fraud to clear his family's debts, and said he would appear before a court on Monday.

They said they wanted also to question Anne Darwin, who had been in Panama, but left there Wednesday. Two British newspapers reported Saturday that Anne told them her husband had spent much of the last five years hiding at home in the northeastern city of Hartlepool.

The Daily Mail and the Daily Mirror said Anne Darwin had given them an account of her husband's missing years. According to the accounts, Anne Darwin said the couple had tens of thousands of pounds of debts caused by the failure of their apartment rental business.

The tabloids quoted her as saying, "John said there was only one way out of the situation, and that was to fake his death. I pleaded with him not to do it, I said it was the wrong thing to do."

According to the newspapers' account, Anne Darwin said she had not expected her husband to go through with the plan - and genuinely thought he was dead when he disappeared. But a year later, her husband came knocking at her door, she was quoted as saying.

According to the newspapers' account, she said her husband pressured her to keep his reappearance a secret so he could have himself declared dead. That would allow her to collect £25,000 (now worth approximately $50,000) in life insurance and lift the burden of her mortgage, the newspapers said.

They quoted her as saying that after authorities officially declared him dead, her husband moved in with her and hid in a small room reached through a hole in the wardrobe, and that he hid in the house for three years.

According to the newspapers, she said the two moved to Panama this year and that her husband was tired of living in hiding and decided to return to Britain, claiming to have forgotten what had happened to him.