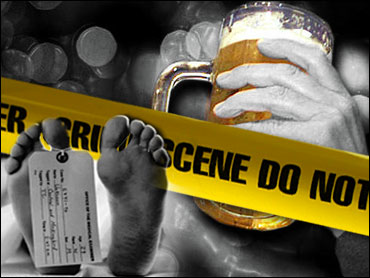 The body of an 18-year-old fraternity pledge who died of alcohol poisoning was defaced with numerous anti-gay epithets and obscene drawings, according to a medical examiner's report.

Phanta "Jack" Phoummarath, a freshman at the University of Texas at Austin, died after ingesting large amounts of alcohol at a pledge party at Lambda Phi Epsilon house in December 2005, authorities said. Phoumarrath's body was found the day after.

"It was disgusting and despicable behavior," Houston attorney Randy Sorrels, who is representing Phoummarath's family, said Tuesday. "This would be the juvenile behavior you might see in junior high or high school, but not college."

Sorrels said Phoummarath was not gay. He said the drawings and epithets were a juvenile "prank," and that it had not yet been determined how long before Phoumarrath's death the actions took place.

His family alleges in a lawsuit against the fraternity that pledges were pressured to drink at the party and that someone wrote vulgar graffiti on Phoummarath's body after he passed out. The medical examiner ruled that Phoummarath died of acute alcohol poisoning.

UT was voted the best party school in the U.S. in a Princeton Review survey of 115,000 students at campuses around the country released this summer.