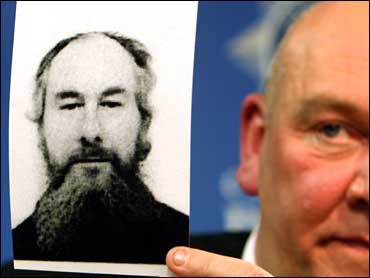 A Briton who turned up alive - years after being declared dead in a canoe accident - appeared in court Monday on fraud charges for allegedly faking his own death in an insurance scam.

John Darwin, 57, was ordered by Hartlepool Magistrates' Court to be held in jail until Friday, when he is to appear again via video link.

Dressed in a maroon sweat shirt and red track trousers, Darwin, a former prison officer, appeared disheveled and confused. He spoke twice during the four-minute hearing, responding "That's correct" when the court read him his full name and saying his date of birth.

Darwin did not enter a plea on the two charges he faces: dishonestly obtaining an insurance claim of 25,000 pounds - now worth about $50,000 - in May 2003 by falsely claiming he had been killed, and obtaining a passport under a false name in October 2003.

His wife, Anne, 55, was arrested on suspicion of fraud after her flight from Atlanta, Georgia, touched down at Manchester's airport Sunday. She had been living in Panama in recent months, but left the Central American country Wednesday after her husband turned up in Britain on Dec. 1.

On Sunday, Mrs. Darwin was transferred to Cleveland, a region 250 miles north of London, where the Hartlepool court is located.

For a few hours Monday, the Darwins were in same compound. Mrs. Darwin was being questioned by detectives about how her husband allegedly hid himself for five years, whether the couple maintained contact after his reported death, and how they apparently came to be photographed together in Panama.

Tracked down in Panama City, she confessed her husband had faked his death because he was deeply in debt, reports CBS News correspondent Elizabeth Palmer.

"John said there was only one way out of the situation, and that was to fake his death. I pleaded with him not to do it. I said it was the wrong thing to do," British newspapers quoted her as saying.

Mrs. Darwin said she had not expected her husband to go through with the plan, and genuinely thought he was dead when he disappeared, according to the papers. But a year later, he came knocking at her door, she reportedly said.

She said her husband pressured her to keep his reappearance a secret so he could have himself declared dead, according to the papers. That would allow her to collect $50,000 in life insurance and lift the burden of her mortgage.

But he showed up at the family home a year after he disappeared and moved back in. The couple then bought the house next door so he could build a hideout, which he reached through a hidden tunnel, reports Palmer.

Then this year, using Darwin's life insurance money, the couple tried to start a new life in Panama.

But apparently he grew tired of hiding, and returned to the UK, hoping to see his two sons.
Last week, the Web site for the company Move to Panama posted a photograph of the couple, apparently taken with a real estate agent in the Central American country.

Police said they were in contact with the couple's two sons, who said they had no idea their father was still alive.

There is "nothing to suggest that the sons of John and Anne were anything other than victims in this case," Detective Supt. Tony Hutchinson of the Cleveland Police told reporters Monday.

Palmer reports the two boys, shocked by revelations in the British tabloids of their parents' elaborate scam, are in hiding.