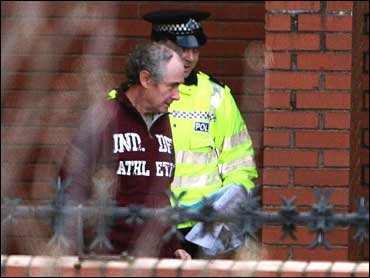 John Darwin, who reappeared five years after his apparent death at sea, has been charged with life insurance fraud and lying to get a false passport, British police said Saturday.

Declared officially dead after an apparent 2002 canoeing accident, Darwin turned himself in at a police station last week, claiming to have suffered amnesia. He is alleged to have masterminded a fraud to clear his family's debts.

Police said he will appear before a court Monday.

Detective Sgt. Iain Henderson said officers want to question Darwin's wife Anne. She is thought be in Miami, Fla., after leaving her home in Panama.

"Clearly authorities will be making inquiries to speak to her," he told reporters.

The bizarre case of a canoeist thought to have drowned five years ago but who turned up last week very much alive continues to baffle and amaze the British, as more revelations come from the wife who claimed the life insurance.

According to CBS News correspondent Larry Miller, Anne Darwin claimed she believed husband John drowned five years ago, but then he showed up, convincing her to keep the scam going.

John Darwin, now 57, continued to live in the same house with his wife in the northeastern city of Hartlepool. When guests came to the house, including the couple's grown children, Darwin would escape through a secret passage into the adjoining house (which the couple also owned), where he stayed in an efficiency apartment.

A former science teacher turned prison guard, Darwin was believed to have died in a canoe accident in the North Sea in 2002. But he appeared at a police station in London last Saturday claiming to have suffered amnesia.

Anne Darwin said she felt guilty for lying to her sons.

"I have been living my life as a lie, constantly looking over my shoulder, realizing something like this could happen at some stage," the 55-year-old Mrs. Darwin was quoted as telling The Daily Mirror and The Daily Mail. "I was never relaxed - always on edge and knowing the truth could come out at any time."

The Mirror reported Darwin had been traveling on a fake passport under the name John Jones, and that his wife transferred money from her bank account in 2005 to help him buy a yacht in Gibraltar, but the sale fell through.

In comments published in newspapers Friday, Mrs. Darwin was quoted as saying it was her husband's idea to move to Panama and that he was there when she arrived six weeks ago.

Miller reports that the couple purchased an apartment and property in Panama where they planned to set up a business selling canoe treks.

Miller said Darwin, while hiding out, would wear disguises and even pretend to limp.

But in Panama, a photograph taken of the couple and posted on a Web site would prove the man who "died" was very much alive.

Mrs. Darwin says she lied to her children for years. The couple's sons said Thursday they want no further contact with their parents.

"Who can blame them?" Mrs. Darwin was quoted as telling British tabloids. "I lied to them - my own sons. What sort of mother am I?"