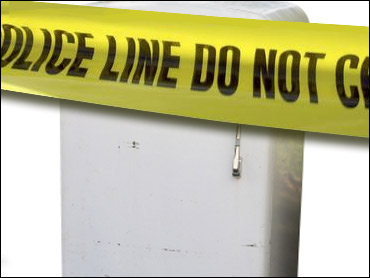 A woman was charged with abuse of a corpse after police found the remains of a baby in her freezer.

Police charged Christine Hutchinson, 22, of Pittsburgh, after interviewing her Thursday evening, several hours after the remains, which police first characterized as a fetus, were found in the freezer in her apartment.

Police were alerted to the remains by a caller from Texas, who knows someone acquainted with Hutchinson, police said.

Officers were told of the 911 call around 12:30 p.m. saying there was "possibly a baby that was dead and was in a freezer in an apartment in Bloomfield," a working-class neighborhood several miles east of downtown, Pittsburgh police Cmdr. Thomas Stangrecki said.

Detectives found what they at first described as a late-term fetus in a brown bag in the freezer, police said.

According to a police affidavit, Hutchinson told police she gave birth to the girl on April 22 and did not call medics or police, the Pittsburgh Post-Gazette reported.

Police do not know if the baby was alive when it was born, but said it was first wrapped in a plastic bag, before it was also placed in the brown bag that was packed into a beer box they found in the freezer, the affidavit said. Police did not say if Hutchinson told them why she put the baby in the freezer.

Lt. Daniel Herrmann said additional charges could be filed, depending on what an autopsy revealed Friday.

Police would not say if the remains showed evidence of trauma.

A spokesman for the Allegheny County Medical Examiner said no information about the baby, including the age, gender or cause of death, would be released until after the autopsy.

Police questioned the woman's ex-boyfriend in connection with the remains, but said they do not believe he was the father. He was not charged.

Hutchinson was in custody awaiting arraignment early Friday. It was not immediately clear if she had an attorney.