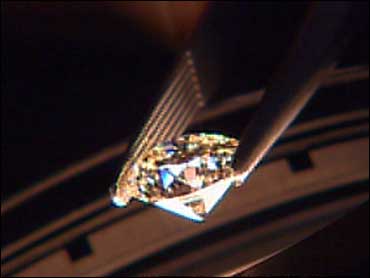 De Beers pleaded guilty Tuesday to charges in a 10-year-old price-fixing case under an agreement that would clear the way for the diamond giant to resume selling diamonds directly in the lucrative U.S. market.

The South African company agreed to pay a $10 million fine after pleading guilty to conspiring to fix prices in the $500 million industrial diamond market.

De Beers has sold diamonds in the United States only through intermediaries since shortly after World War II, when it was first charged with price fixing.

The company was charged along with General Electric Co. in 1994. A judge later dismissed the charges against GE, saying the government had failed to prove its case.

U.S. District Judge George Smith accepted the plea in the case, in which the Department of Justice charged De Beers with keeping prices in the worldwide industrial diamond market artificially high.

The case was filed in Columbus because GE's industrial diamond business was headquartered in suburban Worthington. Industrial diamonds are used to make cutting and polishing tools for a variety of manufacturing and construction applications.

De Beers has no specific plans yet for the U.S. market, said Lynette Hori, spokesman for De Beers in London.

"It doesn't make a big difference in the way we do our business," she said before the hearing. "We operate a selling system to our clients from London and Johannesburg, and we have no plans to change that."

The United States represents half of the worldwide diamond market.

Prosecution of De Beers has been difficult because U.S. officials have no jurisdiction over the company.

But the case also has hindered De Beers from doing business in the United States, said antitrust lawyer John Majoras, a partner with the law firm Jones Day in Washington.

Corporate officials trying to enter the United States run the risk of being stopped by authorities, he said.

"That's a pretty big market to give up and not be actively involved in," he said.

On the down side, Majoras said the deal could expose De Beers to more lawsuits from plaintiffs who now think it is easier and less costly to sue the company.