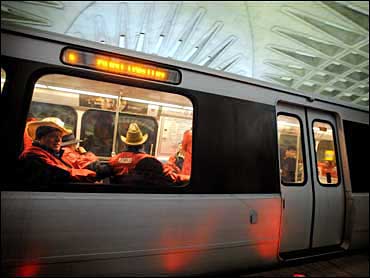 (AP)
During Tuesday's festivities, when cabs are scarce, limos are expensive and buses are downright confusing, everyone from the Metro police to the sandwich artists at Subway seem to agree that if you can't walk it, the rails are your best bet for inauguration transportation.

As someone who rides the train for an hour everyday, twice a day, five days a week and occasionally on weekends, I have become nauseatingly familiar with the unwritten rules of the rails. They are not difficult to figure out. Anyone who is paying the slightest bit of attention to their surroundings or has a modicum of respect for their fellow human beings should be able to deduce the basics.

For example, when heading into a station - or trying to escape from one - people usually stand on the right side of escalator. This is not some en mass form of street performance art. It is so that the lazy, the high-heeled, the elderly and the injured can get out of the way of the running-lates, the highly caffeinated, and the ambitious showoffs who feel the need to climb what are literally some of the tallest moving stairways in North America. Stand right, walk left, and keep you luggage, purses or overcoats on your side of the stair. Nobody likes an escalump.

Once on the train, please do hold on. There is nothing worse than the three hundred pound guy who thinks he is too cool not to have balance and ends up cannon-balling down the length of the train the moment the conductor stops short.

Also, just because there is a full-length poll in the middle of the train does not mean this is a good opportunity to do pull-ups, perform acrobatic feats, or practice the moves you learned watching Carmen Electra's "Stripperobics." Just stand there like a normal human being and try not to embarrass those around you.

Do not sing. The Metro is not a karaoke bar and no one on it is a scout from American idol. Keep the music in your head. Devices come with headphones for a reason - so that those around you are not subjected to your horrible taste in music. I don't care that your new cell phone has a speaker on it or that you think Miley Cyrus is best thing to happen to music since Brittney Spears shaved her head. Sit down, shut up and save the singing for your shower.

Do not take up more than one seat. If the train is empty, you can spread out but the moment passengers start resembling sardines, pack it up and scoot over. That crease in the middle of the chair is your Berlin wall and the train is occupied Germany - cross it without permission and you are gonna wish you were in Switzerland.

Furthermore, if you are only going a few stops, don't sit down. You are causing unnecessary turmoil while people move to let you sit and then move again to let you out. Find a wall to lean against, hold your bag tight to your shoulder, and think of the extra calories you are burning. Every seat you don't take is another Obama-bahama-mama you can consume at the bar later on.

Be the boss of your children. Kids tend to get very excited on shiny, fast-moving objects and unless you take some control of them, they will soon be running rampant, doing a Red line rendition of "Lord of the Flies." The trains are going to be extremely crowded so take their hand, take control take some anti-bacterial gel. If your child gets uncomfortable, unruly or starts spewing some sort of bodily fluid, please get off at the next stop.

Finally, just remember that the number one rule is the golden rule. Be considerate toward your fellow man, be aware of your surroundings and just believe that someway or another, even with the transportation hiccups and the mass migrations, you will eventually make it to your destination.

But don't forget that on the day of the inauguration, the Metro ticket machines are only taking cash. You will need to make sure you have a sufficient amount of quarters, nickels and dimes to get you to where you need to be. After all, credit can sometimes be iffy but when it comes to riding the D.C. Metro, change is something you can believe in.