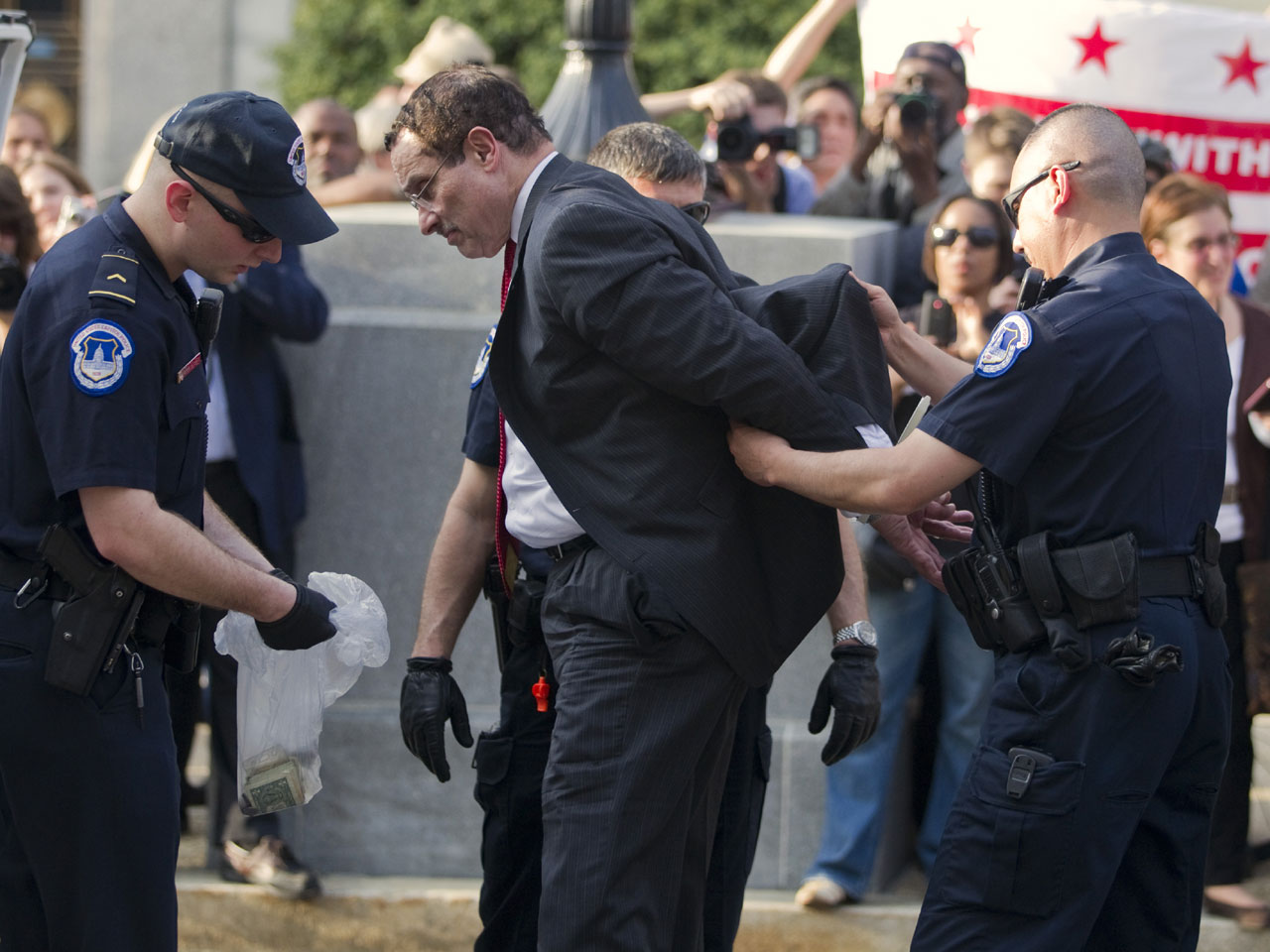 WASHINGTON — The budget deal lawmakers struck to avoid a government shutdown was greeted by some with relief, but it has one city already reeling: the capital itself.

City officials say Washington was used as a pawn last week's budget bargaining, with new restrictions part of the price of a deal. Under the budget agreement reached Friday, the details of which are still uncertain, the city will likely be unable to spend city dollars on abortions for low income women. It may also be banned from spending city money on needle exchange programs believed vital to curbing the spread of HIV in the city, where the disease is considered an epidemic. Also back, a school voucher program favored by Republicans.

Angry that Congress appears ready to take away autonomy granted to the city in the last several years, Mayor Vincent Gray and six Council members including the chairman were among about 30 people arrested Monday outside the Capitol while protesting the changes that might be inevitable.

The news is considered a setback for the city that is unique in that it's a city government but its budget and laws are overseen by Congress. The city had enjoyed more freedom in the past four years when both the House and Senate were controlled by Democrats, the party traditionally more friendly to pleas of autonomy from the heavily Democratic city.

When Republicans took control of the House in January, the city readied for changes. Still, city leaders said they are outraged that Washington appears to have been used as a bargaining chip.

Gray said in a statement Saturday after the deal was announced that he was "angry and terribly disappointed that the District of Columbia suffered collateral damage amidst partisan bickering."

He held up a paper bill Monday before more than 150 fellow protesters and said, "The city should be able to spend its own money."

"If this isn't taxation without representation, I don't know what is," the mayor said. He and Council members, dressed in business attire, sat down in the street outside a Senate office building. Police arrested them, cuffing their hands behind them with plastic loops, and loaded them into police wagons to cheers from the crowd.

Ilir Zherka, the executive director of D.C. Vote, a nonpartisan group that lobbies for more independence for the District, said his group doesn't intend to let the budget pass this week without a fight.

"We're not going to accept that they decided to throw the District of Columbia under the bus," said Zherka, whose group is planning a rally Monday evening on Capitol Hill.

But while the news is considered a setback for the capital city and its 600,000 residents, the restrictions wouldn't be new.

The city's ability to spend money on abortions for low-income women has seesawed back and forth over the last two decades. When Democrats have controlled both houses of Congress and the presidency, in 1993 and 1994 and again in 2009 and 2010, the city has been able to spend its own money to pay for abortions for women on Medicaid. When Republicans have controlled at least one branch of government that ability has been taken away.

The fact that Congress will likely re-impose the ban on abortion funding wasn't a shock to Tiffany Reed, the president of D.C. Abortion Fund, a non-profit organization that makes grants to poor women to pay for abortions, which can cost $300 to $500 or more. Reed said her group, which helped pay for more than 300 abortions a year, had expected the ban to be re-imposed, but she was angry Congress had stepped in again to local affairs just as the lifting of the ban was beginning to take effect.

"It gives me a lot of rage quite frankly," she said. "I'm really disappointed in our pro-choice president that he allowed this to happen."

As for a possible reintroduction of a ban on city money for needle exchanges, it would be a step back. Congress prohibited the city from using its own money for needle exchange programs for two decades beginning in the late 1980s. Other groups stepped in to provide the service with private dollars, but it is a widely held belief that the city's inability to pay for needle exchange programs led to an increase in the number of residents contracting HIV. Approximately 3 percent of city residents are currently living with HIV or AIDS, a level considered by health officials to be an epidemic.

When the ban was lifted in 2007 the city invested money in community programs that collected 300,000 used syringes in the last year. People who work at the city's three needle exchange programs say they aren't sure how they will cope if the city is again unable to provide money.

"It would be nothing short of disastrous," said Cyndee Clay the executive director of at HIPS, an organization that works with sex workers and drug users and is currently exchanging about 8,000 needles a month. "I don't understand why they're doing this to us."

In the past year the city has given HIPS $125,000 to buy syringes and pay for staff. If city funding is cut the organization may not have money to buy syringes, Clay said, calling a potential ban infuriating.

Eleanor Holmes Norton, the city's representative in Congress, said she has not yet seen the actual language in the budget but has been told that the abortion rider and school vouchers are in. Norton, a Democrat who is not allowed to vote on the House floor, said she doesn't believe needle exchange is part of the deal, but she said she won't be sure until she sees final language.

"We got bargained away," Norton said of the budget deal. "I don't know for what."