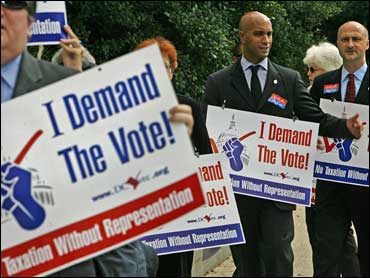 (AP)
A bill that would give District of Columbia voters their own representative in the House will be delayed on the House floor for at least a week while House Democrats decide what to do about a change in language in the Senate version of the bill.

The Senate provision added to the bill would repeal gun-control regulations for D.C. residents, which the National Rifle Association has been lobbying for.

Politico reports that the House Majority Leader Steny Hoyer (D-Md.) had this to say:

"A House vote on the D.C. House Voting Rights Act will be postponed to allow more time for discussion on outstanding matters. I remain committed to working with the Democratic leadership, Congresswoman Norton, President Obama and all other supporters of D.C. voting rights to address the remaining challenges so we can bring this historic legislation to the Floor as soon as possible."

Residents of D.C. are not represented by a voting member in the House or Senate. There is a non-voting delegate representing the District in the House and residents are given three votes in the Electoral College tally that decides the presidency.

The D.C. voting rights bill would also give an additional representative to Utah that would likely go Republican and balance out the likely-to-go-Democratic D.C. seat.