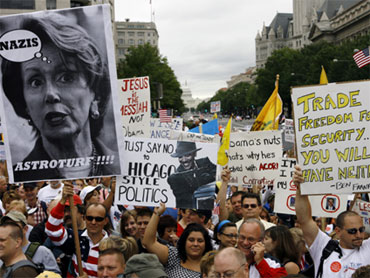 (AP Photo/Jose Luis Magana)
For the folks who believe Saturday's Washington Mall protest is a harbinger of political change, crowd size obviously matters. Unfortunately, they couldn't get their numbers straight.

Earlier in the day, Senator Jim DeMint, (R-SC) said the New York Times was reporting that only about 500 people had showed up at the Mall. (Go to the 1:17 mark to hear his spiel.) On cue, the crowd lustily booed at the mention of this most elite of East Coast elite media institutions.

Where DeMint read that story remains a mystery. Seconds after hearing his claim, I clicked over to the Times piece by Jeff Zeleny which noted in the headline that "thousands" had turned out for the rally. Here was his lede:

"A sea of protesters filled the west lawn of the Capitol and spilled onto the National Mall on Saturday in the largest rally against President Obama since he took office, a culmination of a summer-long season of protests that began with opposition to a health care overhaul and grew into a broader dissatisfaction with government." Sure sounds like more than 500.

But DeMint's exaggeration was just a warm-up. Matt Kibbe, president of FreedomWorks, the conservative organization behind the event, told the protesters that ABC News was reporting that 1 million to 1.5 million people had showed up. At the same time, the U.K.'s Daily Mail put out an estimate of up to 2 million people attending the day's festivities.

At that point, the floodgates of enthusiasm washed through the blogosphere. Predictable cheerleader Michelle Malkin wrote that she heard the turnout was estimated at 2 million. (She wasn't at the event but that didn't stop her from hitting the "publish" button.) By Saturday night, however, ABC printed a story denying it had ever reported the 1 to 1.5 million number. (Malkin later published an acknowledgment that FreedomWorks was in error.)

Newsbuster's Matthew Sheffield was equally exultant but put out a lower estimate. "Estimates for crowd sizes are starting to come in. We're talking at least a million people, folks," he wrote.

And on and on it went throughout the day. In the end, the Saturday protest seems fated to end up as another of those events where the numbers — as well as the historical import — remain in the eye of the beholder. In the absence of any reliable arbiter of crowd size, this much seems clear: the tea party movement generated a respectable turnout for the cameras, so chalk it up as yet another in a long line of Washington protests over the decades.

But a mass movement ready to shake the foundations of establishment power? Not by a long shot.

Nate Silver has an interesting post up Sunday where he mulls the predictable propensity of both right and left to spin events to fit their respective political agendas. Neither side can take much comfort in his spot-on conclusion:

"This was not a small rally. It was also not, in comparison with something like the 2006 pro-immigration protests, a particularly large rally. It was a business-as-usual sort of rally. Mock the protesters at your peril: business as usual suddenly isn't so good for Democrats these days, and the sentiments of the 70,000 people who marched on Washington surely mirror those of millions more sitting at home. They were done a disservice by being represented by a liar like [FreedomWorks'] Kibbe."