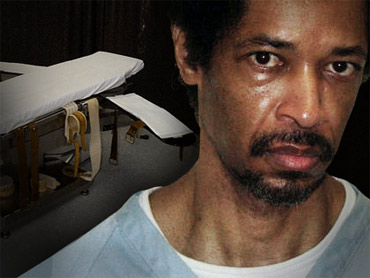 John Allen Muhammad, the mastermind behind the sniper attacks that left 10 dead, was executed as relatives of the victims watched, reliving the killing spree that terrorized the Washington, D.C., area for three weeks in October 2002.

The 48-year-old Muhammad looked calm and stoic, but was twitching and blinking, tapping his left foot as the injections began, defiant to the end, refusing to utter any final words. Victims' families sat behind glass while watching, separated from the rest of the 27 witnesses, who were quiet, looking straight forward, intent on what was happening.

"He died very peacefully, much more than most of his victims," said Prince William County prosecutor Paul Ebert, who witnessed Muhammad die by injection at 9:11 p.m. Tuesday at Greensville Correctional Center, south of Richmond.

Muhammad's attorneys had asked Gov. Tim Kaine to commute his sentence to life in prison because they said he was severely mentally ill, but Kaine denied him clemency.

"I think crimes that are this horrible, you just can't understand them, you can't explain them," said Kaine, a Democrat known for carefully considering death penalty cases. "They completely dwarf your ability to look into the life of a person who would do something like this and understand why."

Muhammad's attorneys released a statement stating they respected the decisions of the Supreme Court and the Governor to not stay the execution, but added, "In its effort to race John Allen Muhammad to his death before his appeals could be pursued, the state of Virginia will execute a severely mentally ill man who also suffered from Gulf War Syndrome the day before Veterans Day."

Muhammad, 48, was executed for killing Dean Harold Meyers at a gas station in northern Virginia. He and his accomplice, Lee Boyd Malvo, also were suspected of fatal shootings in Louisiana, Alabama and Arizona.

Bob Meyers, whose brother was fatally shot at a Virginia gas station, was among the witnesses. He said watching the execution was sobering and "surreal."

"I would have liked him at some point in the process to take responsibility, to show remorse," Meyers said. "We didn't get any of that tonight."

Prosecutors chose to put Muhammad and Malvo on trial in Virginia first because of the state's willingness to execute killers. He and Malvo were also convicted of six other murders in Maryland and both were sentenced to six life terms.

The death penalty was later ruled out for Malvo because the U.S. Supreme Court barred the execution of juveniles, who was 17 during the killing spree.

Nelson Rivera, whose wife, Lori Ann Lewis-Rivera, was gunned down as she vacuumed her van at a Maryland gas station, said that when he watched Muhammad's chest moving for the last time, he was glad.

"I feel better. I think I can breathe better and I'm happy he's gone because he's not going to hurt anyone else," he said.

The motive for the shootings in the nation's capital region remains murky. Malvo said Muhammad wanted to use the plot to extort $10 million from the government to set up a camp in Canada where homeless children would be trained as terrorists. But Muhammad's ex-wife has said she believes the attacks were a smoke screen for his plan to kill her and regain custody of their three children.

Muhammad has never testified or explained why he directed the attacks that terrorized the Washington region, with victims gunned down while doing everyday chores. People stayed indoors, and those who had to go outside weaved as they walked or bobbed their heads to make themselves less of a target.

The terror ended Oct. 24, 2002, when police captured Muhammad and Malvo as they slept at a Maryland rest stop in a car they had outfitted so a shooter could hide in the trunk and fire through a hole in the body of the vehicle.

"I walked over towards Muhammad, and when I looked at him he had a look about him that was just pure evil," Tracy told Orr.

"If he's put to death, does that matter?" Orr asked before Muhammad's execution Tuesday.

"In this situation, yes," Tracy said.

"If you're going to have a death penalty, he certainly deserves it," LaRuffa told Orr.

LaRuffa was left for dead a month before the sniper shootings began. He said Muhammad shot him five times at point blank range and stole his computer and $3,500, money that would be used to finance the coming carnage.

"I was hit through (my) arm," LaRuffa told Orr. "I was hit in the chest, the stomach, the diaphragm and my spine."

Before the execution, he said he had no interest in watching Muhammad die.

Muhammad had been in and out of the military since he graduated from high school in Louisiana and entered the National Guard. A convert to Islam, John Allen Williams would later change his name to Muhammad.

He joined the Army in 1985 and trained in Washington state as a combat engineer. He did not take special sniper training but earned an expert rating in the M-16 rifle - the military cousin of the .223-caliber Bushmaster rifle used in the sniper shootings.

However, his life was full of failure. He was twice divorced, and after serving in the first Iraq war, he could never find financial stability.

He opened a karate school but it didn't last; neither did his car repair shop. The man who looked for self-discipline in exercise and Islam found himself living in a homeless shelter in 2001 and a few months later was accused of shoplifting food.

On Tuesday, Muhammad met with immediate family members but did not have a spiritual adviser, Virginia Department of Corrections spokesman Larry Traylor said.

The families of those killed were ready for execution day.

Cheryll Witz was one of several victims' relatives who planned to watch the execution. Malvo confessed that, at Muhammad's direction, he shot her father, Jerry Taylor, on a Tucson, Ariz., golf course in March 2002.

A small group of death penalty opponents gathered on a grassy area near the prison and had a sign reading, "We remember the victims, but not with more killing."

Beth Panilaitis, executive director of Virginians for Alternatives to the Death Penalty, said those who planned to protest understand the fear that gripped the community, and the nation, during the attacks.

"The greater metro area and the citizens of Virginia have been safe from this crime for seven years," Panilaitis said. "Incarceration has worked and life without the possibility of parole has and will continue to keep the people of Virginia safe."

Sonia Hollingsworth-Wills, the mother of Conrad Johnson, the last man slain that October, sat in the back seat of a car outside the prison before the execution, which she chose not to witness. But she said she wanted to be there and was counting the minutes until Muhammad's death.

"It was the most horrifying day of my life," she said. "I'll never get complete closure but at least I can put this behind me."

Kaine, Virginia's first Roman Catholic governor, has openly expressed his faith-based opposition to capital punishment, but promised as a candidate in 2005 that he would carry out Virginia's death penalty law despite his beliefs.

In September, Kaine delayed the October execution of a former Army intelligence worker from Maryland convicted of killing a northern Virginia couple, saying he needed more time to consider the case. That execution is scheduled for next week.