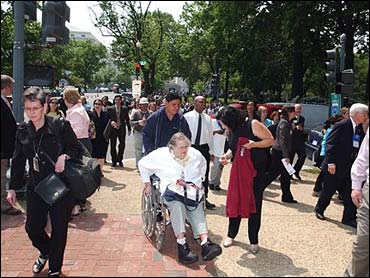 The government revoked the license of the pilot in charge of the small plane that flew within three miles of the White House, saying he was an "unacceptable risk to safety" in the sky.

The punishment was meted out to Hayden L. "Jim" Sheaffer after the errant flight led to the scrambling of military aircraft and the panicked evacuation of thousands of people from the White House, the Capitol and the Supreme Court.

Sheaffer's student, 36-year-old Troy Martin, who had logged only 30 hours of flight time, was flying the plane when the military aircraft intercepted it, the Federal Aviation Administration said.

According to the FAA, Sheaffer, 69, wasn't even supposed to have a passenger in the single-engine Cessna in the first place. He hadn't met the requirement to do so: three takeoffs and three landings within the previous 90 days of the flight.

He didn't take the most basic steps required of pilots before flying a plane, the FAA said. He failed to check the weather report before leaving Smoketown, Pa., and he didn't check the FAA's "Notices to Airmen," which informs pilots of airspace restrictions and how to respond to a military aircraft.

When he got lost, he didn't call air traffic control or a flight service station to establish his location, which was 40 to 45 miles south of where he actually was, the FAA said.

The plane was intercepted by a U.S. Customs Service Black Hawk helicopter and a Citation jet, and then by two F-16 fighters that dropped four flares.

"At no time during any of these events did you exercise the judgment to take physical control or command of the aircraft from your inexperienced passenger," the FAA said.

Though hundreds of people have mistakenly flown into Washington's restricted airspace, the FAA rarely revokes a pilot's license for such an offense. In this case, the agency determined Sheaffer "constitutes an unacceptable risk to safety in air commerce."

The agency said no action would be taken against Martin.

Private planes are not allowed to fly in the Air Defense Identification Zone, or ADIZ — an area of about 2,000 square miles radiating from the three airports around Washington — unless they have a special transponder code and maintain radio contact with the FAA.

They're not allowed at all within the Flight Restricted Zone, or FRZ, about a 16-mile radius around the Washington Monument.

Sheaffer can reapply for his license in a year.