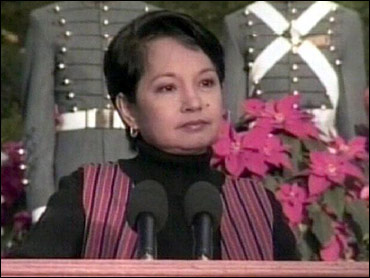 Philippine President Gloria Macapagal Arroyo is getting America's version of the royal treatment - a state visit featuring a day full of the pomp and glitter that President Bush reserves for courting the most crucial of friends.

The visit is designed to maximize Arroyo's exposure to the White House spotlight. From the moment Arroyo steps out of a limousine on the South Lawn Monday morning until the state-dinner entertainment in late evening, the news media will be in tow.

In between, the schedule includes an Oval Office meeting, a news conference, an official greeting ahead of the black-tie dinner and a photo opportunity before the meal.

Accompanying the Philippine president is her husband, lawyer Jose Miguel T. Arroyo. About 130 people, many of them Philippine officials, received dinner invitations.

For the current president, Monday's state visit marked the third in 28 months. Conferring the rare distinction on Arroyo signaled the value President Bush places on his relationship with the Philippines. It is payback for her loyal support in the fight against international terrorism.

Arroyo was among the first world leaders to call Bush and express condolences after the Sept. 11, 2001, attacks. Arroyo and Prime Minister Goh Chok Tong of Singapore were the only two Southeast Asian leaders to support the U.S.-led war in Iraq, and she expelled three Iraqi diplomats after President Bush asked allies to do it. The Philippines is sending a 175-member humanitarian mission to postwar Iraq.

The state visit offers an opportunity to join another ally in a "victory lap" following the U.S.-led military success in Iraq, said Catharin Dalpino, a specialist on U.S.-Asian relations at the Brookings Institution.

Singapore's Goh visited Washington last week and signed an agreement that would wipe out tariffs and other trade barriers on about $33 billion in annual trade and give U.S. banks and companies more access to one of Asia's main financial centers.

She is seeking duty-free privileges for Philippine products, such as dried mangoes, pineapple juice and tuna. Arroyo also wants to see Philippine businesses get reconstruction contracts in Iraq and is trying to lure U.S. companies to invest in operations on the islands.

The bombings this week in Morocco and Saudi Arabia, as well as intelligence reports that suggest the possibility of terror attacks in Southeast Asia, add to the urgency of Arroyo's request for more U.S. military aid for the only former American colony.

"What she's looking for is an expansion in U.S. military assistance in terms of equipment, training and advisers," said Patricia Paez, a spokeswoman at the Philippine Embassy in Washington. "The U.S. forces will not play any combat role, but they will help us in routing out the terrorists ourselves."

Lamb was the main course on the menu. Susan Graham, an opera singer from Midland, Texas - the town where Bush spent part of his youth - was the scheduled entertainer.

President Bush's only other state dinners were for the presidents of Mexico and Poland.

He and Arroyo have a few personal things in common. Both are 56. The Philippine president is the daughter of a former president; Mr. Bush is the son of one. Both took office on the same day in 2001.