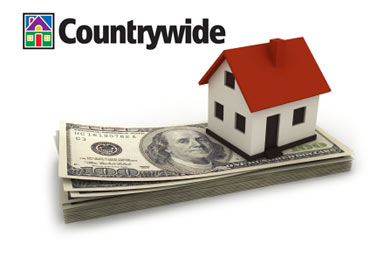 At the height of the subprime boom, perhaps nobody gave out more risky loans than Countrywide Financial.

But while the government debated how to regulate the mortgage industry, Countrywide pursued a shrewd strategy: attempt to curry favor among influential people by offering them sweetheart loans, reports CBS News investigative correspondent Sharyl Attkisson.

Special terms included knocking a full point, or one percent, off a loan. On a $2 million VIP mortgage -- that's a perk worth $20,000 dollars.

"That was the whole idea," said attorney Anthony Salerno. "It wasn't just to give them a good deal, it was to make sure they knew or at least they believed that they were getting a special deal."

That includes Senators Kent Conrad, Chairman of the Budget Committee and a member of the Senate Finance Committee, and Chris Dodd - who just happens to head the committee that oversees the mortgage industry. Each received at least two VIP loans, and are the subject of a Senate Ethics investigation. They declined our interview requests, but have denied wrongdoing in other interviews.

"I did absolutely nothing unethical here," Conrad said.

"No special deals," Dodd said. "No one ever offered one."

But CBS News has learned that Countrywide's reach went far beyond two senators.

Jackson's daughter Annette Watkins even got VIP loan status when an internal Countrywide email noted her father "is expected to be confirmed (by the Senate) as Secretary of HUD (Housing and Urban Development)."

Minyon Moore, former Chief Operating Officer of the Democratic National Committee, and President Clinton's Director of White House Political Affairs also came to Countrywide for a loan and got VIP treatment. Countrywide emails explain that Moore "is a former White House staffer and the lead lobbyist for Dewey Square whom we have on retainer."

Some of the most flagrant connections were with the House Financial Services Committee, which had oversight authority over Countrywide.

A chief counsel for the committee, Clinton Jones, got VIP treatment, and internal Countrywide emails leave no doubt as to why: "Jones is ... an advisor to ranking Republican members of Congress responsible for legislation of interest to the (financial services) industry and of importance to Countrywide."

A committee aide asked Countrywide to help his sister and brother-in-law after they got turned down for refinancing. Countrywide obliged calling the staffer "an aide to a senior member of the House Financial Services (Committee)" - a big supporter of Countrywide's - "and very important to us."

Terms offered some of the VIP borrowers were outside Countrywide's normal policy, so the policy was manually overridden when the loans were processed. For example in the case of James Johnson, former CEO of Fannie Mae, Countrywide policy called for "1.375 additional points to be added to the 4.375% fixed base rate approved by Anthony Mozilo." But those extra points were manually overridden and reduced to "0" according to a House Oversight Committee report. Policy was also overridden manually on terms for Senators Conrad and Dodd, UN Ambassador Richard Holbrooke (Special Envoy for the Obama Administration) and others.

And when Countrywide found out Senator John Edwards and his wife were purchasing a $3.8 million dollar home in Georgetown, the lender wanted to provide the mortgage… even offering to "do whatever it takes" (see below) to close the loan in just eight short days. 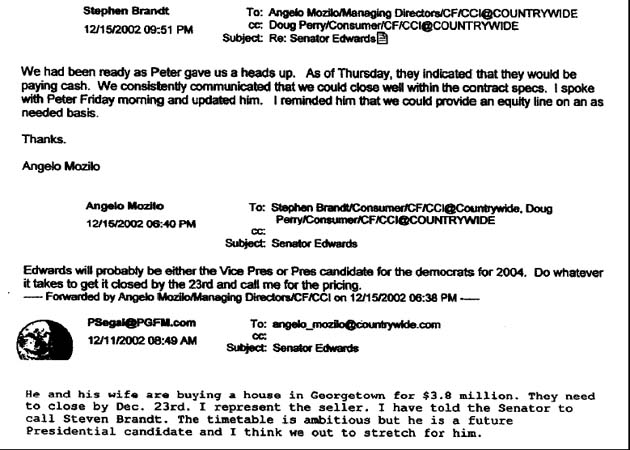 "He is a future Presidential candidate and I think we out (sic) to stretch for him," says an internal Countrywide email. However, the Edwards didn't accept the offer and instead chose to pay cash for their property.

"This is a pretty vast attempt to influence government that did not benefit the American people in this meltdown of the economy around the world," Issa said.

Democrats are blocking a Republican effort to subpoena Countrywide documents. For now, it's not clear whether there was anything illegal about the loan arrangements or whether Countrywide was able to fend off regulations by currying favor with the right people.