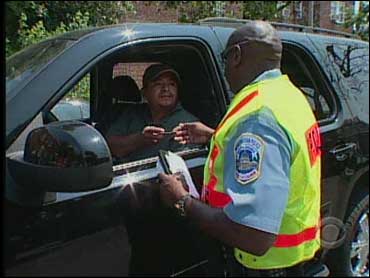 This weekend, District of Columbia police re-established a series of checkpoints in a neighborhood wracked by a series of shootings and stabbings. And as CBS Evening News Correspondent Thalia Assuras reports, the show of force has both strong supporters and outspoken critics.

"To shoot two 13-year-old children in the back or to shoot them as they were trying to run away is the most cowardice act I have ever seen in 18 years," said Chief Cathy Lanier.

In the early hours Saturday, one person was stabbed, and seven people were shot -- one of them a 13-year-old boy who later died.

Trinidad, just four miles east of the White House, is a neighborhood in transition -- but in this police district, 22 people were killed through June -- more than double the number last year.

In response, Assuras reports, controversial checkpoints went up in an effort to "fence out" violent intruders. At the edge of the troubled neighborhood police stopped cars and asked drivers about their business.

"Do you have any reason to be passing through Trinidad today?" one checkpoint officer asked a local woman.

"I live two blocks up the street," she answered.

Reaction from residents is mixed.

"I can understand where the police officers are coming from, you know, helping the community," said one woman.

"Do they keep the bad guys out?" Assuras asked another woman.

"No," she answered without hesitation. "They still get in here."

The checkpoints in this area were initially set up last month after a similar spike in violence over nine hours left seven men dead. But the program also sparked a lawsuit.

"For them to take a roadblock and impede my progress, it's unconstitutional," said William Robinson. "That means that I'm living under martial law in a police state."

Robinson, who's lived here for more than 50 years, is part of a class-action suit demanding an end to the roadblock program. He also says it just doesn't work.

But police claim the checkpoints have been a huge success. During the last run -- no one was killed here.

"Until a judge orders me to stop I'm going to do everything I can to protect the people in Trinidad," said Chief Lanier.

Police plan to keep the checkpoints in place for another four days -- at least.