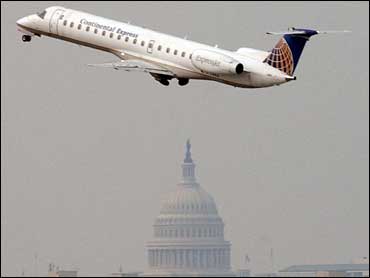 Air security officials are making adjustments and lawmakers are questioning whether military jets can adequately intercept hostile aircraft over the nation's capital after a harrowing incident last month during Ronald Reagan's funeral.

Military aircraft patrolling over Washington were unable to get into position where they could have shot down a suspicious plane, officials said. The plane turned out to be carrying Kentucky's governor to the funeral, but miscommunication among U.S. defense agencies turned the routine flight into a frantic evacuation of the Capitol.

The incident proved what security experts have been saying since Sept. 11, 2001, officials said, that preventing an aerial attack depends on measures taken well before a plane enters the restricted air space over Washington.

Bush administration officials were to testify before Congress on Thursday about the problems encountered June 9, when Gov. Ernie Fletcher's flight to Reagan National Airport caused a breathless evacuation of the Capitol building on the day Reagan's body was brought to lie in state.

The Federal Aviation Administration, NORAD and other security agencies have made significant changes since the episode to address shortcomings exposed that day, officials said.

"The purpose of the hearing is find out what went wrong, and have they fixed it," House Transportation Committee Chairman John Mica, R-Fla., said.

"The good news is we evacuated the Capitol in record time. The bad news was it was a false alarm and it appears there was a lack of coordination between FAA and Homeland Security, and we can't afford that kind of a gap in the future," Mica added.

NORAD said it scrambled two jets during the incident, but declined to be more specific because of the classified nature of its engagement rules. The fact that "the plane landed without incident June 9 indicates that the procedures developed since Sept. 11 work," it said.

Homeland Security spokeswoman Katy Mynster said, "We believe appropriate security measures were put in place based on the information we had at the time. ... Of course, we continue to look for ways to improve communications."

Members of Congress whose staffs have looked into the episode said the incident exposed flaws two years after the Sept. 11 attacks led to a major upgrade of America's security net.

"The incident raises the question: Does the existing no-fly zone around our nation's capital give sufficient time to intercept a terrorist-controlled flight?" said Rep. Jim Turner, D-Texas, the top Democrat on the House Homeland Security Committee. "Further it appears that the FAA miscommunicated with other agencies responsible for the protection of Washington."

Government, military and congressional officials said two F-15 fighter planes were already patrolling on June 9 in anticipation of the Reagan funeral and were diverted when security monitors saw the governor's plane as an unidentified and potentially hostile aircraft.

However, under the Pentagon's rules of engagement, the jets could not get close enough to be in position to shoot the plane down if it was indeed heading toward the Capitol, according to officials outside NORAD.

The officials declined to further describe the rules of engagement, except to say they are different for fighter jets in wide open areas than in urban areas and that they require several conditions to be met before a shootdown is considered possible.

The entire scrambling of the jets was unnecessary, caused by miscommunications between the FAA, which directs air traffic, NORAD, which protect America's air space from impending threats, and the National Capital Region Coordination Center, which coordinates air security in the nation's capital.

The NCRCC and FAA now can view the same radar system, and both FAA controllers and civilian pilots have been reminded that planes without fully functioning transponders will not be allowed into Washington airspace.