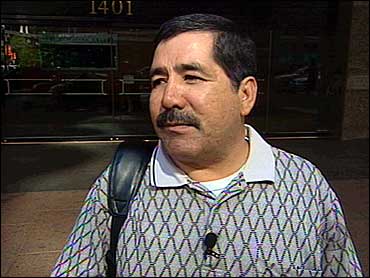 It's quitting time in Washington D.C. and commuters are lining up to catch a ride home with a complete stranger.

As CBS News Correspondent Sharyl Attkisson reports, it's called "slugging." Think of it as organized hitchhiking or anonymous carpooling where you never have to drive, and it's one heck of a way to beat the high cost of fuel – up to $5,000 a year.

Domingo Gonzales is an old slugging pro. He's been doing it for 16 years.

It's a marriage of convenience.

By hooking up, both driver and slug get home quicker. Three in a car let's passengers ride in faster High Occupancy Vehicle lanes.

But there are strict rules of slugging etiquette, which you can find on a Web site: Don't talk. Don't offer money or gifts. No smoking. No eating. And slugs don't touch the radio or air conditioning.

Pam Knapp has been slugging for six years now, and it begs the question: As a woman does it make her nervous picking up two strange men?

"Well, I thought about that and my husband even mentioned that he didn't like me picking up strange men, but I've never felt uncomfortable ever," she says.

A stolen wallet is her only bad experience.

"Here, a woman can totally pick up two strangers, and, you know, everybody pretty much is 99.9 percent officer workers," says Gonzales.

Knapp laughs as those worries melt away as riders blow by bumper-to-bumper gridlock. A half-hour later they arrive safely at a commuter lot close to home where the slugging journey began this morning.

Gonzales didn't spend a penny on gas or put a mile on his own car. He may be a slug, but he knows it's the other commuters doing the gas-guzzling crawl in the slow lane.