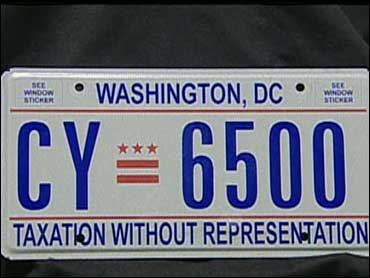 The District of Columbia's two-century-long wait for a voice in Congress was a step closer to ending Tuesday with a crucial Senate vote to take up legislation giving the capital city's 600,000 residents a full seat in the House.

The Senate voted 62-34, two more than needed, to begin debate on the measure that would increase the House to 437 members. It would give the Democratic-dominated city a new vote while adding a fourth seat to Republican-leaning Utah.

Key to the vote was that Democrats, who overwhelmingly support the bill, have seven more Senate seats than two years ago when the chamber fell three votes short of the 60 required to end a Republican-led filibuster.

The bill still faces contentious amendments and may have to overcome GOP opposition to moving to a final vote. If it does pass the Senate, possibly by the end of the week, the bill goes on to a receptive House and ultimately to President Barack Obama, who supports it.

If enacted into law, the measure is likely to face court challenges from opponents who contend that giving a House seat to D.C. is unconstitutional because the District is not a state. The Supreme Court could be the final arbiter.

"I find it unimaginable that 600,000 Americans have no voice and no vote in the United States Congress," the Senate's no. 2 Democrat, Dick Durbin of Illinois, said in urging support for the measure.

Past votes denying residents of the federal capital a vote in the House "left the citizens of the District with the wholly unsought-after distinction of being the only residents of a democratically ruled national capital in the world who have no say in how their nation is governed. It's really astounding," said Sen. Joe Lieberman, I-Conn., sponsor of the measure with Sen. Orrin Hatch, R-Utah.

"We're closer than we've ever been," Ilir Zherka, executive director of the advocacy group DC Vote, said ahead of a preliminary vote.

More than 3,000 people from across the nation called their senators Monday asking them to support the measure, according to DC Vote. Callers from the District, who don't have a senator, were directed to lawmakers who might be uncertain, such as Sen. Kay Hagan, D-N.C.

Washington has been without a vote in Congress since 1801, when Congress took control of the newly created capital on the Potomac but did not provide residents with voting rights.

Voting rights advocates believe the measure will win enough Senate support for a final vote later this week that requires only a simple majority for passage. The House Judiciary Committee votes on the legislation Wednesday, and the full House could take it up in early March.

With the president's signature, D.C. residents would elect a representative with full voting rights for January 2011, barring court interdiction.

One possible stumbling block, Zherka said, is that some lawmakers could add amendments making the bill less appealing to voting rights supporters. In 2007, the bill was slowed in the House after Republicans proposed language that would weaken the city's gun laws.

Opponents argue that the bill violates the Constitution, which says members of the House should be chosen "by the people of the several states." The District, of course, is not a state.

He says the bill would set a dangerous precedent.

"If Congress can create new types of members, non-state members, they could give Puerto Rico ten districts," Turley says. "They could give military installations votes."

Sen. Susan Collins, R-Maine, who spoke in favor of the bill earlier this month, said the question of constitutionality should be resolved by the courts, not Congress.

"As a matter of fundamental fairness, I believe the residents of the District of Columbia should have representation in the House," she said.

Sen. John McCain, R-Ariz., has spoken out against the bill. He said the legislation could be the first step toward giving the District two senators. He also criticized the compromise that would give Utah an extra House seat, saying that is unfair to other high-growth states.

"I don't like the deal and I think it is unconstitutional," he said.

The District has been represented since 1991 by Del. Eleanor Holmes Norton.

Norton, like five other delegates from island territories, can vote in committees and on some amendments on the House floor but not on final passage of legislation.