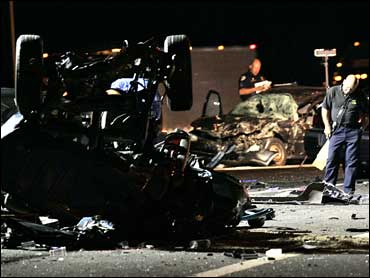 Police are looking for a motorcycle rider being blamed for a fatal, seven-car, chain-reaction crash on the Capital Beltway.

At least two people were killed and 15 injured — including two Prince George's County police officers — in the crash near Ritchie Marlboro Road. The highway was closed in both directions for hours during the rescue, cleanup and investigation.

CBS affiliate WUSA correspondent Doug Buchanan reports that it began with a police chase, in which an officer was trying to stop a speeding motorcycle on the Inner Loop.

At about 7 p.m. the police cruiser was heading fast along the shoulder as the motorcycle was moving fast on the opposite shoulder. The police officer appeared to lose control of his vehicle and rear-ended a pickup truck. That vehicle flipped over the guardrail and rolled down an embankment onto the Outer Loop, where five other cars were hit.

An off-duty officer driving on the Outer Loop was flown to a trauma center. The officer who tried to stop the biker is also hospitalized, but his injuries aren't considered life-threatening.

"I've been on law enforcement a long time, and I've been on a number of tough scenes, and this is a tough scene," said Chief Melvin High of the Prince George's County Police Department.

The biker sped away. Police say they are looking for a black motorcycle. In addition to eyewitness accounts, the police cruiser's in-car camera is also being checked.

Although the Beltway was later reopened to traffic, state highway officials will start rolling two-lane closures across the Beltway starting at 10 a.m. Thursday as part of the accident reconstruction.